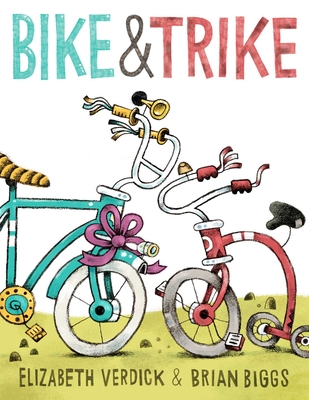 Toy Story meets Cars in this sweet and relatable story that explores universal themes of friendship and growing up.

Look out, world! There’s a shiny, new Bike in town. But what does this mean for rusty, old Trike?

Trike is a rusty little fellow, a trusty little fellow, on three worn-down wheels. Now that Lulu has outgrown him, he’s lonely in the garage. But then a newcomer shows up. He’s shiny and big and has FOUR wheels. It’s BIKE! Gulp. Trike worries that Bike won’t know how to take care of Lulu. Bike won’t listen, and challenges Trike to a race. It’s ON!

Brian Biggs is the author and illustrator of many books for kids, including the Tinyville Town books, the New York Times bestselling Frank Einstein series (written by Jon Scieszka), Everything Goes, and Bike & Trike by Elizabeth Verdick. Brian has worked as an art director, graphic designer, and animator for interactivity and multimedia projects. His illustrations have appeared in magazines, newspapers, advertising, posters, toys, and puzzles. He works in an old garage. Visit him at MrBiggs.com.
or support indie stores by buying on
Copyright © 2020 American Booksellers Association