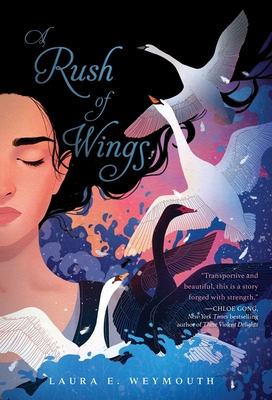 A Rush of Wings

For fans of Serpent & Dove and A House of Salt and Sorrows comes a “transportive and beautiful” (Chloe Gong, New York Times bestselling author of These Violent Delights) romantic fantasy about an untrained witch who must unlock her power to free her brothers from a terrible curse and save her home.

Rowenna Winthrop has always known there’s magic within her. But though she hears voices on the wind and possesses unusual talents, her mother Mairead believes Rowenna lacks discipline, and refuses to teach her the craft that keeps their Scottish village safe. And when Mairead dies a sinister death, it seems Rowenna’s only chance to grow into her power has died with her. Then, on a fateful, storm-tossed night, Rowenna rescues a handsome stranger named Gawen from a shipwreck, and her mother miraculously returns from the dead. Or so it appears.

The resurrected Mairead is nothing like the old one. To hide her new monstrous nature, she turns Rowenna’s brothers and Gawen into swans and robs Rowenna of her voice. Forced to flee, Rowenna travels to the city of Inverness to find a way to break the curse. But monsters take many forms, and in Inverness, Rowenna is soon caught in a web of strangers who want to use her raw magic for their own gain. If she wishes to save herself and the people she loves most, Rowenna will have to take her fate into her own hands and unlock the power that has evaded her for so long.

Praise For A Rush of Wings…

"Transportive and beautiful. Each page turned in A Rush of Wings is the smell of salt and the spray of sea water. With lyrical prose and a steadfast protagonist fighting against her world and then some, this is a story forged with strength."
— Chloe Gong, New York Times bestselling author of These Violent Delights

“Fierce, lush, and lyrical, A Rush of Wings feels simultaneously like a story passed down through ages and something entirely new. A must-read from historical fantasy’s best.”
— Hannah Whitten, author of For the Wolf

“Outlander meets an old classic in A Rush of Wings, Laura E. Weymouth’s retelling of the seven swans. Chock-full of cold, coastal atmosphere and ancient magic, Rush also features Weymouth’s signature, a fully-drawn cast of characters who are by turns prickly, stern, deceptive, cruel, and vulnerable. Another success from a brilliant author.”
— Anna Bright, author of The Beholder and The Boundless

“A gorgeously-rendered retelling—lovely, raw, and fierce.”
— Joanna Ruth Meyer, author of Echo North and Into The Heartless Wood

"Atmospheric and lyrical, Weymouth spins magic and whimsy like she was born of it. A Rush of Wings bewitched me body and soul, and I love...I love...I love it!"
— Lauren Blackwood, author of Within These Wicked Walls

"A Rush of Wings is a fierce, dark-hearted fairy tale that yearns toward the light. Readers will love the book's passionate, loyal characters, beguiling monsters, and subtle, sea-scented magic. With her usual immersive and beautiful writing and a resilient, powerful heroine, Weymouth has crafted another book that feels like a classic but speaks perfectly to this moment in time."
— Erica Waters, author of Ghost Wood Song and The River Has Teeth

"Once again, Laura Weymouth’s storytelling is unmatched. Calling to mind childhood fairy-tales and teeming with original interpretation, A RUSH OF WINGS is refreshing blend of nostalgia and unpredictability. Her prose will lift you up on white wings before plunging you from sharp cliffs, and  her characters will dazzle against a world framed by history and coloured by magic. There are stories to read and stories to live in - and this is a world readers will never want to leave."
— Aleksandra Ross, author of Don't Call the Wolf

“A Rush of Wings is a lyrical, moving retelling of one of my favorite fairy tales. Rowenna's determination to save her family and journey to claiming her own strength will sweep you away.”
— Rebecca Kim Wells, author of Shatter the Sky

"Beyond its exquisite story and eighteenth-century Scottish setting, readers will be swept up in Rowenna’s battle with her inner demons."
— BCCB

"Weymouth (A Treason of Thorns) hits the source material’s traditional beats, enhancing it with evocative prose, a satisfying romance, and an atmospheric setting."
— Publishers Weekly

"It's easy to lose track of time while reading A Rush of Wings. It's a mesmerizing story with wonderful ambiance that asks readers to question their preconceived notions of heroes and villains. Readers looking for something both fresh and familiar are sure to enjoy this powerful retelling."

“A lyrical delight of a book.”
— Buzzfeed

Laura E. Weymouth is the author of several novels, including the critically acclaimed The Light Between Worlds, A Treason of Thorns, and A Rush of Wings. Born and raised in the Niagara region of Ontario, Laura now lives at the edge of the woods in western New York with her husband, two wild-hearted daughters, and an ever-expanding menagerie of animal friends. Learn more at LauraEWeymouth.com.
Loading...
or support indie stores by buying on