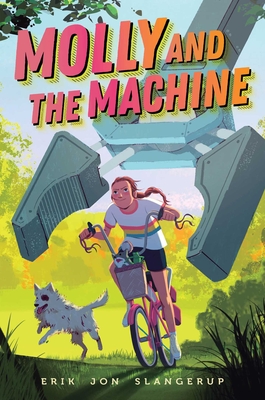 Perfect for fans of Stuart Gibbs and James Ponti, this hilarious and poignant middle grade sci-fi adventure set in 1980s Ohio follows a young girl who makes incredible discoveries about family and belonging while chasing a kidnapping robot.

It’s the summer of 1983, and one by one, the kids of Far Flung Falls are disappearing.

With sheer drop-offs at every turn, the woods behind Molly McQuirter’s house have always been a dangerous place—even before something big and metal started lurking in them. But when Molly’s little brother is snatched up before her eyes, she has no choice but to follow. Sure, Wally tends to ruin everything, and his finger practically lives up his nose, but she isn’t about to let him be abducted by some unknown enemy, especially since their mom ran off to Florida two years ago and their dad, who’s slowly morphing into a couch potato, won’t be any help. If Molly wants to protect the family she has left, Wally’s rescue is going to be up to her. So aided a crew of unusually determined pets, Molly sets off on Pink Lightning—her tricked-out bicycle—on a chase through the hills of southern Ohio.

Finding the robot culprit only creates more questions, however, and when the unlikely mastermind behind the robot is uncovered, a new story begins to unfold—one of lost love, family bonds, and some seriously weird science.

Praise For Molly and the Machine (Far Flung Falls #1)…

"An absolute blast of a page-turner, jam-packed with laugh-out-loud humor, a boatload of heart, and more action than you might believe can fit into a single book. I can't wait to read more adventures from Far Flung Falls!"
— Jarrett Lerner, author of EngiNerds and Geeger the Robot

“Maybe Molly McQuirter hasn’t always been the best big sister to her brother Wally, but she comes through when it really matters! Erik Jon Slagerup’s debut MOLLY AND THE MACHINE introduces a host of eccentric characters, a “villain” with a heart-rending origin story, a madcap adventure that won’t quit—and a heroine who finds more gumption, courage, and allies than she ever knew she had. Readers will be cheering her on from start to finish!”
— Margaret Peterson Haddix, New York Times bestselling author

“A delightful adventure with a nostalgic twist.”

Erik Jon Slangerup grew up in a magical time before cell phones or the internet. It was called the eighties. He spent most of it roaming outdoors unsupervised, which inspired him to write tales of adventure. Molly and the Machine is his debut middle grade novel. He has also written several picture books, including the award-winning Dirt Boy. Erik is the father of five, which has been his biggest adventure yet. He lives in Columbus, Ohio. Discover more at ErikJonSlangerup.com.
Loading...
or support indie stores by buying on