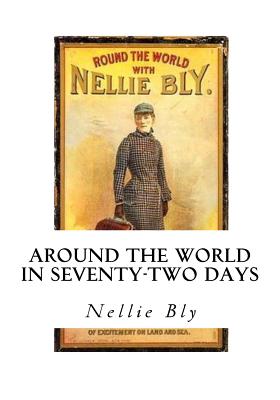 Around the World in Seventy-Two Days

Around the World in Seventy-Two Days by Nellie Bly In 1888, Bly suggested to her editor at the New York World that she take a trip around the world, attempting to turn the fictional Around the World in Eighty Days into fact for the first time. A year later, at 9:40 a.m. on November 14, 1889, she boarded the Augusta Victoria, a steamer of the Hamburg America Line, and began her 24,899-mile journey. She brought with her the dress she was wearing, a sturdy overcoat, several changes of underwear and a small travel bag carrying her toiletry essentials. She carried most of her money ( 200 in English bank notes and gold in total as well as some American currency) in a bag tied around her neck. The New York newspaper Cosmopolitan sponsored its own reporter, Elizabeth Bisland, to beat the time of both Phileas Fogg and Bly. Bisland would travel the opposite way around the world. To sustain interest in the story, the World organized a "Nellie Bly Guessing Match" in which readers were asked to estimate Bly's arrival time to the second, with the Grand Prize consisting at first of a free trip to Europe and, later on, spending money for the trip.