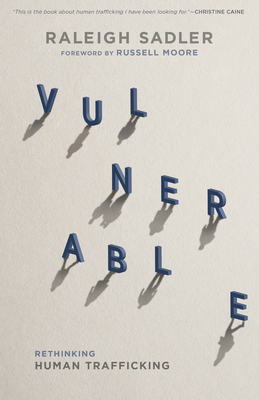 There are more than 40 million enslaved people in the world today.

This is overwhelming. A number so large leaves us asking, What could I even do to help?

Raleigh Sadler speaks and writes on the topics of vulnerability and human trafficking. He has been published at The Gospel Coalition, The Huffington Post, and The Ethics and Religious Liberty Commission, among others. In 2013, he began a movement called Let My People Go, which grew into a nonprofit organization that comes alongside and empowers local churches to address the injustice of human trafficking in a holistic manner.

"This is the book about human trafficking I have been looking for. By sharing his story, Raleigh Sadler helps to demystify the issue, and provides us with keys on how we can play our part in bringing about solution. Vulnerable: Rethinking Human Trafficking, will challenge and inspire you to truly love your neighbor as you love yourself. A timely book for this hour."
Christine Caine, founder, The A21 Campaign

"C. S. Lewis once described Christianity as “a fighting religion.” Those who are serious about following Christ into the world will also be serious about fighting against what is wrong in the world, especially where injustice and abuse are the norm. As the father of two girls, I am especially appreciative of Raleigh’s efforts in Vulnerable, which is a sort of roadmap for fighting for the hearts of, and fighting against the oppression of, girls and women who are potential or real victims of the sex trade. Much of the content and stories in this book are unsettling . . . and purposefully so. For when our hearts are unsettled, we are moved to action. I pray that Vulnerable will impact you and your community in this way."
Scott Sauls, senior pastor of Christ Presbyterian Church in Nashville, Tennessee, and author of Befriend and Irresistible Faith

"God has called Christians to come alongside and advocate for the most marginalized in our society. Today as we speak, there are thousands in our communities who have been trafficked against their will, whose lives are not viewed as valuable, but as property for the powerful. To engage in this important work of justice, Christians must be biblical in their thinking. This book helps unpack what it means to both fight for the vulnerable and realize our own vulnerability, how in our weakness, we find the strength to step into the mission of God. I urge you to thoroughly read this book, to let it shape your approach to activism, and then pass it on to a brother or sister in Christ."
Dan Darling, vice president for Communications for the Ethics and Religious Liberty Commission and author of The Dignity Revolution

"The church is at its best, and is living out the redemptive realities of the gospel most fully, when it is running toward the vulnerable and broken with truth, hope, and grace, rather than remaining in safety and comfort. In Vulnerable, Raleigh Sadler describes with vivid clarity one of the hardest arenas of our modern world. But, like the sound guide he is, Raleigh points to where and how the church can bring the light and life of Christ."
John Stonestreet, president, the Chuck Colson Center for Christian Worldview and coauthor of A Practical Guide to Culture

"Human trafficking has risen into public consciousness over the past few years even thought this type of exploitation has been a global phenomenon for centuries. Trafficking is modern day slavery and is the fastest growing criminal industry in the world. The stories and statistics can be overwhelming. The Bible does not hesitate to depict the harsh reality of violence and oppression, and it clearly calls us to fight for justice and mercy for all people as God intended. But what can an ordinary person do to respond? In Vulnerable, Raleigh offers wisdom and hope as well as tangible responses to fight trafficking."
Justin S. Holcomb, Episcopal priest, seminary professor, and author

"This book is both a passionate call for help and a handhold for where to start. Before reading Vulnerable the gap between my everyday life and those who are being exploited seemed, if I’m honest, almost insurmountable. But Raleigh’s stories invited me to walk right up to the hurting and look into their eyes—not as a hero, but as a follower of Jesus. I identified with them, I got a new grasp on trafficking—and I got a conviction that I can’t look away."
Grace Thornton, author of I Don’t Wait Anymore

"Raleigh brings a message that all churches need to hear. Through stories and lived experience, Vulnerable breaks myths and focuses on what trafficking victims truly need- equipping all of us to make real a difference."
Rebecca Bender, Survivor Leader, author, and CEO

"Raleigh Sadler is an extraordinarily important voice for the voiceless trapped inside of sex trafficking."
Mac Pier, founder and CEO, Movement.org, author of A Disruptive Gospel