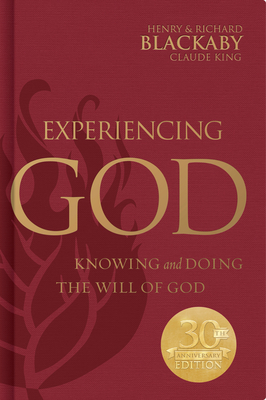 Knowing and Doing the Will of God, Legacy Edition

A modern classic that has sold millions of copies worldwide, Experiencing God is based on seven Scriptural realities that teach us how to develop a true relationship with the Creator. By understanding how God is working through us even as we try to fathom His ways, we can begin to clearly know Him.

Henry Blackaby is founder and president emeritus of Blackaby Ministries International, an organization built to help people experience God. He and his wife, Marilyn, have five children, fourteen grandchildren, and seven great-grandchildren. They live in Jonesboro, Georgia.

Richard Blackaby is president of Blackaby Ministries International and the oldest child of Henry and Marilyn Blackaby. He holds degrees from the University of Saskatchewan and Southwestern Baptist Theological Seminary and an honorary doctorate from Dallas Baptist University. He and his wife, Lisa, have three children and six grandchildren. They live in Jonesboro, Georgia.

Claude King is editor-in-chief for undated resources at LifeWay Christian Resources. He holds degress from Belmont College and New Orleans Baptist Theological Seminary and lives with his wife in Murfreesboro, Tennessee.