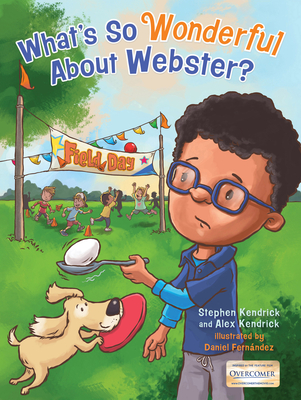 What's So Wonderful About Webster?

It’s almost field day, and Webster is worried. He can’t run fast, he trips on the jump rope, and his Frisbee always lands in a tree. How will he help his class get the medal? Webster is sure that God forgot to make anything special about him.
Join Webster and his class as the whistle blows and he discovers a few God-given skills that just might save field day. This whimsical, illustrated picture book reminds young readers that they were each wonderfully made by God!

Daniel Fernández was born in Santiago de Chile, and has lived in Germany since the age of five. He has worked as Creative Director, Art Director, illustrator, designer, Head of Art and worked for many advertising agencies and Publishing Editorials in Chile, The United States, Germany, Denmark and Italy. He has published over 30 titles. He has won awards for creativity and art direction: Cannes, New york Festivals, Big Amauta, International Echo Awards Grand prix, Big Idea Ogilvy, Gráfica el Mercurio, Effie Awards, Fiap.
Loading...
or
Not Currently Available for Direct Purchase