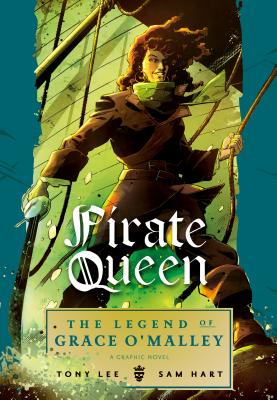 The Legend of Grace O'Malley

A captivating retelling of the story of Grace O’Malley, the Pirate Queen of Ireland, and her struggle to protect the friends, family, and country that she loved.

A true daughter of the fearsome O’Malley clan, Grace spent her life wishing to join the fight to keep Henry VIII’s armies from invading her homeland of Ireland — only to be told again and again that the battlefield is no place for a woman. But after English conspirators brutally murder her husband, Grace can no longer stand idly by. Leading men into battle on the high seas, Grace O’Malley quickly gains a formidable reputation as the Pirate Queen of Ireland with her prowess as a sailor and skill with a sword. But her newfound notoriety puts the lives of Grace and her entire family in danger and eventually leads to a confrontation with the most powerful woman in England: Queen Elizabeth I. With a gripping narrative and vivid, action-packed illustrations, the fourth entry in Tony Lee and Sam Hart’s Heroes and Heroines series captures the intensity and passion of one of history’s fiercest female warriors.

Praise For Pirate Queen: The Legend of Grace O'Malley…

In this exciting graphic novel, fierce, scarlet-haired Grace O'Malley grows up on the sea alongside her chieftain father in Ireland...Hart's illustrations are vigorously kinetic, creating compelling scenes of battle that rocket along at a breakneck pace more electrifying than any action movie. While Lee and Hart's previous volumes tackled more widely known figures (such as Joan of Arc and Robin Hood), discovering the legend of Grace O'Malley feels like unearthing a hidden gem. The tale takes place in the United Kingdom in the 1500s; all characters portrayed present white. Spirited, thrilling, and wonderful.
—Kirkus Reviews (starred review)

The exciting biography, the fourth in Lee and Hart’s Heroes and Heroines series, will encourage teens to learn more about O’Malley, pirates, and Irish-English history, but it will also make them examine the qualities they can expect from laudable leaders.
—Booklist

Tony Lee is a prolific comic-book writer who has worked on X-Men, Doctor Who, and Starship Troopers and is the author of Outlaw: The Legend of Robin Hood; Excalibur: The Legend of King Arthur; and Messenger: The Legend of Joan of Arc. He has also written for radio, television, and newspapers. Tony Lee lives in England.

Sam Hart is a comic-book illustrator who has worked on Starship Troopers, Judge Dredd, and Brothers: The Fall of Lucifer. He is also the illustrator of Tony Lee’s Outlaw: The Legend of Robin Hood; Excalibur: The Legend of King Arthur; and Messenger: The Legend of Joan of Arc. Sam Hart lives in Brazil.
Loading...
or
Not Currently Available for Direct Purchase