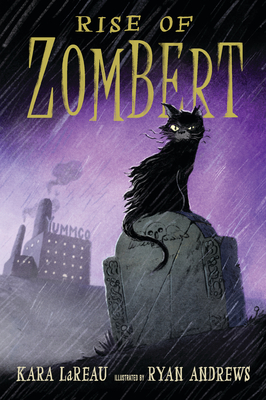 Could Bert really be a zombie cat? Two friends put their brains together to find out in a wry new mystery series.

While helping her best friend, Danny, film his latest horror flick, Mellie discovers a scraggly cat behind a dumpster outside the YummCo Foods factory. Mellie names the stray Bert and hides him in her room, knowing her parents won’t let her keep him. But soon Bert has decapitated all her stuffed animals, and before long he is leaving the headless corpses of birds and mice as gifts for her. Danny is convinced the cat is a zombie, living on the brains of his victims. But is that what is really going on? Award-winning author Kara LaReau lets loose a fresh and sharply funny new mystery series, with an irresistible touch of the macabre. Fans of creepy stories and animal lovers alike will devour this fast-moving first episode in one gulp.

Ryan Andrews is the illustrator of The Dollar Kids by Jennifer Richard Jacobson. He is also a comics artist, and two of his web comics have been nominated for Will Eisner Comic Industry Awards. He lives in Fukuoka, Japan.
or support indie stores by buying on
Copyright © 2020 American Booksellers Association