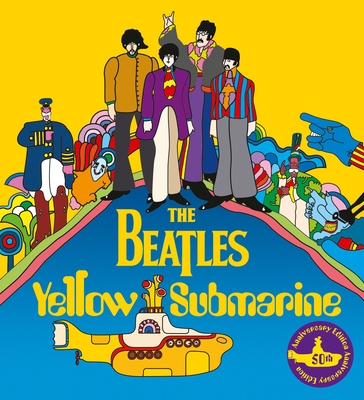 Fifty years ago, The Beatles set off on a magical adventure — and this psychedelic anniversary edition let fans of all ages join the iconic journey.

It was fifty years ago today! Some 80,000 leagues beneath the sea, a colorful land of music and laughter existed called Pepperland — a place where Sgt. Pepper’s Lonely Hearts’ Club Band was always playing your song. That is, until the Blue Meanies burst onto the scene and chased all the magical music away. . . . So began the classic 1968 film Yellow Submarine,inspired by the eponymous song. With a refreshed midi hardcover and a cut-paper, accordion-fold gift edition marking half a century since the tale first dazzled audiences, nostalgic Beatles fans and excited youngsters alike will be clamoring for a ticket to ride.

The delirious color and the shape-shifting figures offer delight on every page. Love IS all you need.
—Kirkus Reviews (starred review)

The text has some of the wonderful puns from the movie.
—School Library Journal

Adults of a certain age will surely find it hard to take this walk down memory lane without hearing an internal soundtrack.
—The Horn Book

The artwork is appropriately bright and psychedelic, the dialogue replete with puns and wordplay. The kids will love it, and so will their baby-boomer grandparents.
—Orlando Sentinel

I have been reading YELLOW SUBMARINE to my kids for several weeks since its publication, and they are hypnotized. . . . The story is simple and brilliant.
—Entertainment Today

Inspired by the song "Yellow Submarine" from the Beatles' Revolver album, the film YELLOW SUBMARINE was released in 1968 and was quickly hailed as a visionary masterpiece. This extraordinary collaboration of talent — Heinz Edelmann's art wedded with Beatles music — was brought to life in celluloid with groundbreaking animation techniques. More than thirty-five years later, the film continues to beguile adults and children alike.
Loading...
or support indie stores by buying on