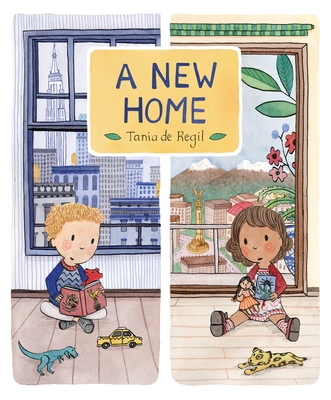 As a girl in Mexico City and a boy in New York City ponder moving to each other’s locale, it becomes clear that the two cities — and the two children — are more alike than they might think.

But I’m not sure I want to leave my home.
I’m going to miss so much.

Moving to a new city can be exciting. But what if your new home isn’t anything like your old home? Will you make friends? What will you eat? Where will you play? In a cleverly combined voice — accompanied by wonderfully detailed illustrations depicting parallel urban scenes — a young boy conveys his fears about moving from New York City to Mexico City while, at the same time, a young girl expresses trepidation about leaving Mexico City to move to New York City. Tania de Regil offers a heartwarming story that reminds us that home may be found wherever life leads. Fascinating details about each city are featured at the end.

Praise For A New Home…

De Regil, in her colored pencil, watercolor, and gouache illustrations, moves from the wide snapshots of either city into close experiences. As both stories merge and progress through the same events (attending sporting and cultural events, playing, traveling to their new homes), the narrative furthers the conversation on the similarities between the protagonists. The stories come together in a sweet moment when they cross paths at the airport, hopeful for the possibilities of different adventures in their new homes...A heartwarming story that depicts the anxiety of moving and leaving the familiarity of one's own culture behind.
—Kirkus Reviews

A little boy from New York City and a little girl from Mexico City take turns voicing their apprehensions about moving to a new home in a new country—a move that the audience immediately recognizes as essentially swapping places...Pair this with Kostecki-Shaw’s Same, Same but Different (BCCB 11/11) and encourage kids to consider the pleasures of new surroundings waiting to be explored and embraced. A Spanish-language edition is also available.
—Bulletin of the Center for Children's Books

This debut picture book features a boy in New York City who learns he will be relocating to Mexico City, and a girl in Mexico City considering her move to the Big Apple...A positive, reassuring recommendation for families coping with relocating to a new city. Recommended for school and public libraries.
—School Library Journal

What makes this simple story work are De Regil's brightly colored mixed-media illustrations...Appended with information about each scene represented, this makes an upbeat and reassuring addition to books about moving.
—Booklist

Tackling both big-life concepts—fear and sadness that accompany moving—as well as geographic and cultural concepts, it’s an excellent read-aloud that will provide a solid foundation for further classroom learning.
—BookPage

De Regil’s reassuring ode to one’s beloved home acknowledges both the flaws and vibrancy of the two places and encourages children to be brave and open-minded about moving; the dual narratives of bilateral north-south movement offer readers a unique perspective and challenge the stereotype of a unidirectional flow of migration.
—The Horn Book

Tania de Regil studied fashion design at Parsons School of Design in New York City before moving back to her native Mexico City, where she finished her degree. A New Home is her American publishing debut. She lives in Mexico City and travels to the United States frequently.
Loading...
or support indie stores by buying on