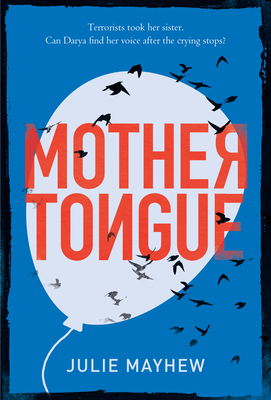 Based on the shocking Beslan school siege in 2004, this is a brave and necessary story about grief, resilience, and finding your voice in the aftermath of tragedy.

On the day she brings her sweet little sister, Nika, to school for the first time, eighteen-year-old Darya has already been taking care of her family for years. But a joyous September morning shifts in an instant when Darya’s rural Russian town is attacked by terrorists. While Darya manages to escape, Nika is one of hundreds of children taken hostage in the school in what stretches to a three-day siege and ends in violence. In the confusion and horror that follow, Darya and her family frantically scour hospitals and survivor lists in hopes that Nika has somehow survived. And as journalists and foreign aid workers descend on her small town, Darya is caught in the grip of grief and trauma, trying to recover her life and wondering if there is any hope for her future. From acclaimed author Julie Mayhew comes a difficult but powerful narrative about pain, purpose, and healing in the wake of senseless terror.

Based on a school siege in 2004 in Beslan, Russia, this novel illustrates the power of one person’s story to bring empathy to many. Mayhew’s novel uses Darya’s Russian voice and culture as well as her emerging English skills to heighten her message of the elasticity of time and how we deal with tragedy. Darya carries the weight of her sister Nika’s death after the schoolhouse siege, musing in her English workbook on what and how to remember and what and whom to forgive. Mayhew’s overall attention to the redemptive power of language, voice, and story make it a strong, compelling novel.
—ALAN (blog)

Mayhew (The Big Lie) constructs a vividly detailed Russian world in Darya’s stifling countryside town and in her experience of cosmopolitan confusion and solitude in Moscow. Darya’s self-honesty and resilience as she learns to survive the unbearable creates a raw, compelling read.
—Publishers Weekly

Readers may be unaware of the 2004 tragedy at Beslan where Russian separatists captured a school and killed over 300, but they will feel the effects of this story as though it were ripped from today’s headlines...A dark and deep story...this will appeal to readers who don’t flinch at depictions of dire circumstances.
—Booklist Online

Darya’s longing for a life of autonomy and respectability is relatable. Background knowledge of Russia will make reading easier; a glossary and information on Russian nomenclature helps fill the gap.
—Bulletin of the Center for Children's Books

Julie Mayhew has written plays for radio and the stage and is the author of Red Ink and The Big Lie. She is also the cofounder and host of a short-story cabaret and the head of a writers’ workshop. Julie Mayhew lives in the United Kingdom.
Loading...
or
Not Currently Available for Direct Purchase