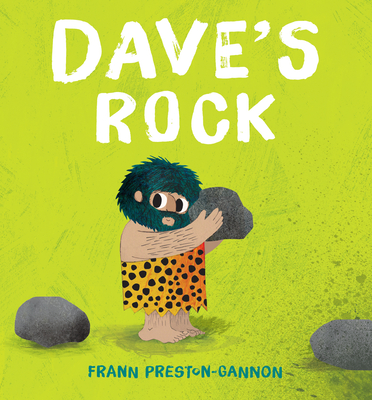 In this funny follow-up to Dave's Cave, two lovable cavemen endeavor to make their rocks the very best they can — inventing, in the process, something rather remarkable.

Dave loves his rock. Jon loves his rock, too. The two buddies compete over whose rock is biggest, fastest, prettiest, and tallest. When they discover that granite has so much more potential than its natural state, the two friends begin to chisel new shapes, tossing and playing games with their now-rounded rocks. But their woodland friends have other (genius) ideas for how to use these new shapes — as circles with holes in the middle. Anyone up for a ride?

Frann Preston-Gannon is the author and illustrator of several books for children. She was the first U.K. recipient of a Sendak Fellowship in 2011, and in 2014 her first picture book, The Journey Home, was long-listed for the Kate Greenaway Medal. She is one-fifth of the design group Zombie Collective, which specializes in workshops and pop-up galleries. Frann Preston-Gannon lives in London.

Cavemen compare rocks, try to top each other, finally invent fun game...it's salutary to see an escalating conflict resolved in an amicable, even creative way, and a bit of wordless byplay in which a set of forest creatures invent a wheeled scooter with the discarded game pieces adds a droll finish. The diagrams the animals draw in the dirt make an especially funny counterpoint to the dialogue. With ingenuity and good will, sticks and stones can be turned to better uses than breaking bones—but the tale demands readers who are patient with cavespeak.
—Kirkus Reviews
or
Buy Here
Copyright © 2020 American Booksellers Association