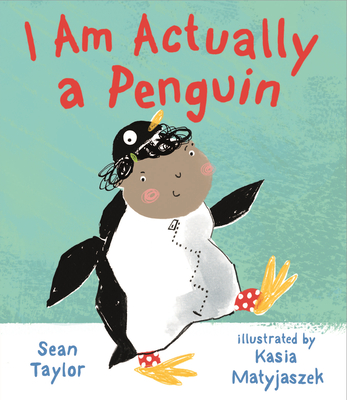 I Am Actually a Penguin (Hardcover)

When a little girl is given a penguin suit, she decides that living as a penguin is much more fun than just dressing as one. Penguins don’t ride the bus like people do, they don't talk like people do, and they certainly don't eat fish sticks like people do. Her family tells her, “You’re not actually a penguin.” But she knows that she ACTUALLY is. A hilarious new picture book about using your imagination — but also knowing that sometimes your costume needs to be washed!

Sean Taylor is an award-winning author, storyteller, and teacher who has written more than twenty books for young children, including Hoot Owl, Master of Disguise and I Want to Be in a Scary Story, both illustrated by Jean Jullien; A Brave Bear, illustrated by Emily Hughes; and Don’t Call Me Choochie Pooh!, illustrated by Kate Hindley. Sean Taylor lives in England.

Kasia Matyjaszek is an Edinburgh-based illustrator who graduated with a master's degree in illustration from the Edinburgh College of Art in 2010. This is her second picture book.

Praise For I Am Actually a Penguin…

The bright mixed-media illustrations are full of motion and personality, and scenes of the child festooning the living room with toilet-paper snow and sliding down the stairs face first on her belly are sure to elicit chuckles from kids (and sucked teeth from adults). A funny story that encourages readers to be unapologetic about who they actually are.
—Kirkus Reviews

This lighthearted romp celebrates children’s freedom to try on different identities and extends imaginative play to new (and sometimes annoying-to-parents) levels...Scenes of penguin mania, including the girl draping the sofa in "snow" (toilet paper) and standing in the fridge, are a hoot. Reality finally intrudes with an urgent need to wash the outfit, but the girl's adaptability (and knack for quick costume changes) is both comic and triumphant.
—Booklist Online
or
Buy Here
Copyright © 2020 American Booksellers Association