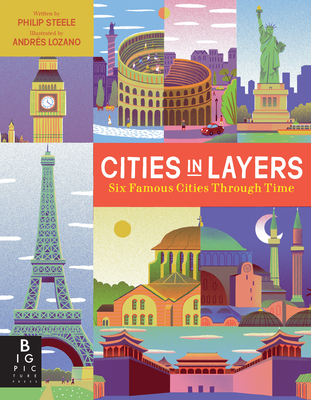 The world's most famous cities through the ages!

Walk around any famous city and layers of history start to emerge. In London, Roman walls are dwarfed by office blocks. In Rome, ancient treasures like the Colosseum stand shoulder to shoulder with buildings from the Renaissance. In New York, skyscrapers from the 1920s and 1930s predate enormous glass towers.

In Cities in Layers: Six Famous Cities Through Time, six major world cities are shown at different stages throughout history. A clever die-cut element allows readers to really peel back layers of time.

Philip Steele was born in Dorking, Surrey, England. He attended University College, Durham, where he studied modern languages. In the 1970s he worked as an editor for various publishers, including Hodder and Hamlyn. In 1980 he moved to the Isle of Anglesey, in North Wales, where he now lives. He has written on a wide range of topics, especially in the fields of history, junior biography, peoples, and cultures.

Andrés Lozano is a Madrid-born illustrator who now lives in London. He has worked for a wide range of international clients, including the New York Times, Virgin Atlantic, and McSweeney's. He has also published several picture books in the U.K. and the U.S.
Loading...
or support indie stores by buying on