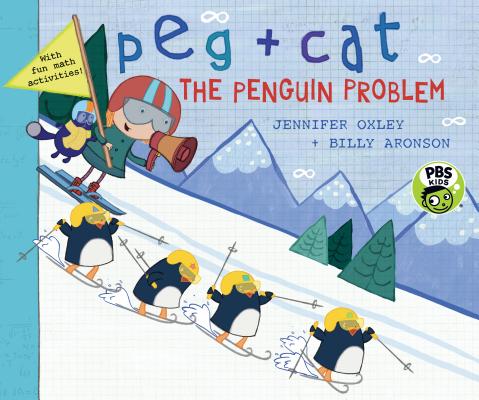 Skiing past hurdles can be a problem when you don’t know your over, under, and in between. Peg and Cat to the rescue!

Peg and Cat are at the South Pole preparing to watch the ski race at the Animal Winter Games. Suddenly they spy the Penguins zooming downhill. CRASH! The Penguins apologize (“Snow problem,” says Cat), but it seems that there is a problem: the Penguins keep slamming into things! So they all try again, with Peg shouting directions each time they come to a hurdle. "Go over! Go under! Go in between!" But the Penguins still have no clue, because they don’t know what over, under, and in between mean. Luckily, Cat points out some directional arrows to follow, and a problem is solved . . . for the moment. Now can anyone figure out how to keep the ice floe the Penguins have landed on from tilting?

Peg + Cat is the Emmy Award–winning animated TV series created by Jennifer Oxley and Billy Aronson and produced by the Fred Rogers Company. It was named best new series at the 2015 Kidscreen Awards.
or support indie stores by buying on