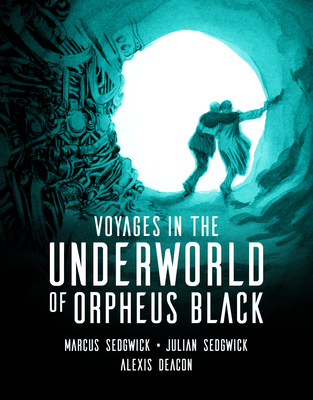 Voyages in the Underworld of Orpheus Black

Harry Black is lost between the world of war and the land of myth in this illustrated novel that transports the tale of Orpheus to World War II–era London.

Brothers Marcus and Julian Sedgwick team up to pen this haunting tale of another pair of brothers, caught between life and death in World War II. Harry Black, a conscientious objector, artist, and firefighter battling the blazes of German bombing in London in 1944, wakes in the hospital to news that his soldier brother, Ellis, has been killed. In the delirium of his wounded state, Harry’s mind begins to blur the distinctions between the reality of war-torn London, the fiction of his unpublished sci-fi novel, and the myth of Orpheus and Eurydice. Driven by visions of Ellis still alive and a sense of poetic inevitability, Harry sets off on a search for his brother that will lead him deep into the city’s Underworld. With otherworldly paintings by Alexis Deacon depicting Harry’s surreal descent further into the depths of hell, this eerily beautiful blend of prose, verse, and illustration delves into love, loyalty, and the unbreakable bonds of brotherhood as it builds to a fierce indictment of mechanized warfare.

Praise For Voyages in the Underworld of Orpheus Black…

Despite its complex crafting, the story never feels overwrought. It flows, grounded in character and the theme of preserving humanity from the machines of war. Even as Harry emerges from the abyss, a satisfying conclusion leads the reader from the darkness, delivering an emotional gut-punch that will provoke as much feeling as thought.
—Booklist (starred review)

Deacon’s black and white artwork, which deftly handles literal scenes of London under bombardment and the feverish imaginings of Harry’s injured brain, is by turns moving and appropriately troubling, and it will lure fans of World War II fiction to this moody tale.
—Bulletin of the Center for Children's Books

The marriage of fantastical elements with the atrocities of war is not new, nor is World War II an unexplored literary topic, but this triptych treatment is interesting...readers who enjoy their war stories steeped in philosophy will walk away satisfied. A recommended purchase. Hand to fans of Markus Zusak’s The Book Thief and even Kurt Vonnegut’s Slaughterhouse-Five.
—School Library Journal

Marcus Sedgwick is a writer and illustrator. He is the author of many books, including She Is Not Invisible, Revolver, and Midwinterblood, which won the Michael L. Printz Award. He is the coauthor, with his brother, Julian Sedgwick, of the graphic novel Dark Satanic Mills, illustrated by John Higgins and Marc Olivent. He lives in England.

Julian Sedgwick is a writer of many books for children, including the Mysterium trilogy, the Ghosts of Shanghai trilogy, and the graphic novel Dark Satanic Mills, cowritten with his brother, Marcus Sedgwick, and illustrated by John Higgins and Marc Olivent. Julian Sedgwick lives in England.

Alexis Deacon is the author of A Place to Call Home, Cheese Belongs to You!, and I Am Henry Finch, all illustrated by Viviane Schwarz. He is also an acclaimed artist and the illustrator of Jim’s Lion and Soonchild by Russell Hoban. Alexis Deacon lives in London.
Loading...
or
Not Currently Available for Direct Purchase