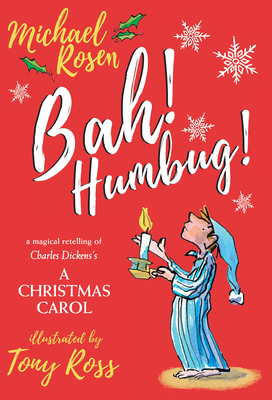 A timely retelling of A Christmas Carol for the whole family about a smartphone-obsessed dad.

This Christmas, join Michael Rosen and Tony Ross with their unforgettable retelling of Charles Dickens's beloved holiday classic. Harry Gruber plays the role of Scrooge in his school's production of "A Christmas Carol," and he is extra nervous about tonight's performance because his father is in the audience — not away for business, as usual. Will the story's message of Christmas cheer and the redemptive power of love reach his father's distracted Scrooge heart?

Michael Rosen is one of the most popular contemporary poets and authors of books for children. He received the Eleanor Farjeon Award for services to children's literature in 1997 and served as Children's Laureate in the U.K. between 2007 and 2009. His books include the worldwide bestseller We're Going on a Bear Hunt and the award-winning Michael Rosen's Sad Book as well as What’s So Special About Shakespeare? and What’s So Special About Dickens? He lives in London.

Tony Ross was born in London in 1938. After training at Liverpool School of Art, he worked as a cartoonist, graphic designer, advertising art director, and art lecturer. In 1976 he published his first illustrated children's book. He is best known for the Horrid Henry and Little Princess series of books, which have both been adapted for television, as well as illustrating books for David Walliams. He lives on the Welsh Borders and has three daughters.

An accessible and funny morality tale that's useful reading for work-obsessed parents as well as their children.
—Kirkus Reviews

A magnificent, magical retelling of Charles Dickens’s A Christmas Carol, author Michael Rosen has woven a brilliant tale within a tale, perfectly complemented by the marvelous illustrations of Tony Ross. At once lighthearted and a cautionary story for young and old alike, Bah! Humbug! is perfectly executed in every way.
—Kendal Rautzhan's "Books to Borrow"
or
Buy Here
Copyright © 2020 American Booksellers Association