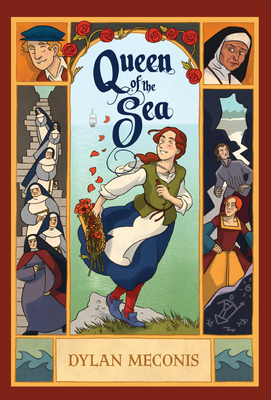 1. What is life like for Margaret growing up on the Island before Eleanor arrives? What kinds of tasks fill her days? Who does she spend time with? What does she learn to do? What aspects of life on the Island help make the nuns self-sufficient? In what ways do they rely on the visits of the Regina Maris?

2. The nuns are a big part of Margaret’s life. What does she learn about their pasts? Why are they on the Island? What are some conflicts she has with Sister Agnes? How does she feel about Sister Agnes at the end of the story? Explain the mission of the Elysian order and how the nuns fulfill it.

4. What does Margaret learn about herself from the nuns and others living on the Island before Eleanor’s stay? What else would she like to know about herself? When Margaret realizes that she cannot leave the Island, the knowledge changes the Island “from a wonderful place — the only place — to a grim one” (page 126). Why does she feel this way?

5. Summarize what Margaret finds out about her parents. How does she learn it, and what is her reaction? Why do you think Sister Agnes lets her hear the informa­tion? The motto of Eleanor’s mother’s family is Je sais qui je suis (page 319). How could that motto be applied to Margaret’s life?

6. Why does Eleanor come to the Island? Explain her heritage, history, and rivalry with Catherine. Why does Eleanor want to be queen again? What are the obstacles in her way? From what you see of Eleanor in the story, discuss whether you think she would be a good queen.

7. Who is Francis? Why does he come to the Island? Why is Eleanor initially angry at him? Describe their relationship. What are some ways that Margaret helps Eleanor and Francis? Why does she help them? What are Francis and Eleanor planning to do at the end of the story?

8. Eleanor teaches Margaret how to play chess. How does the game relate to Eleanor’s life and her political strug­gles? Explain why Eleanor says that the queen is “the most valuable piece on the chessboard” (page 317). How is Margaret like a pawn that can sneak across the board and become “a new queen” (page 318)?

9. Eleanor tells Margaret that she will tell her what she knows about William when Margaret can beat her at chess. Why does Eleanor lie about this? What are other examples of how she treats Margaret early on in their relationship? In what way is Margaret a threat to her? Describe how Eleanor’s attitude toward Margaret varies and what it is at the end of the book.

11. When Margaret is thinking about who would be a bet­ter queen, Eleanor or Catherine, she compares Francis and Mother Mary Clemence, who she describes as “the opposite of Francis in every way” (page 284). How are they opposites? What does Margaret conclude about which queen would be better? Do you agree?

12. Francis explains to Margaret, “Our Queen Eleanor can feel great joy, Margaret. But I do not know that she could ever be happy” (page 377). Why does he think that? Do you agree? Discuss his statement that “a wise leader cannot force her people to be wise, but a cou­rageous leader can convince her people to be brave” (page 376).

14. When Eleanor describes jumping in a puddle as a child, Francis points out that Eleanor’s nurse was almost sent to prison for not stopping her. What are some of the other unreasonable punishments in the story from the past, in the present, and threatened for the future? What did King Edmund do to his enemies, real and per­ceived? How about Catherine? Why do you think there was so much harshness and violence in politics then?

15. Early in the story, Margaret and William read about forgiveness. When William vows to avenge his family, Margaret says, “Seeking revenge is a sin. You’re sup­posed to forgive your enemies” (page 101). Why does she think that? Do you agree? Who does Margaret for­give, and who forgives her? When else is forgiveness important in the story?

17. Why do you think the book is titled Queen of the Sea? Recount the story of the Queen of the Sea (page 262) and talk about how it ties in to the rest of the book. What is the legend about selkies, and when does it come up? Discuss ways in which the sea is central to Margaret’s life.

18. Captain Marley talks about the importance of sons and tells Margaret that when a queen marries, her husband will become the ruler. Why are males considered more important than females in the time period in which this book is set? Describe some of the strong women portrayed in the book, including those in legends and saints’ stories. What kind of power or strength do they have?

19. Discuss the interaction between text and illustrations in the book. Find places where the pictures reflect the words and others where they portray things not in the text. What information do you learn from the art about the time and place and how people lived?