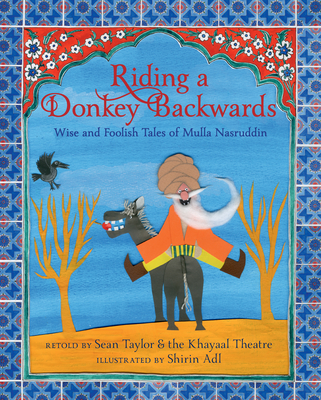 Timeless wisdom is found in absurdity in these tales of an iconic Muslim character known as the sagest man in the village — and also its biggest fool.

Would you like to know how a thief can turn into a donkey? Whether a cow can climb a pole? Or why you should spoon yogurt into a lake? Mulla Nasruddin knows all the answers, and he might also tell you why he rides his donkey backwards. Whether in the guise of an imam in a mosque or a beggar in the street, this trickster is never at a loss for a rejoinder, though it may leave you scratching your head, rolling your eyes, or laughing out loud. Enjoy twenty-one classic tales about a much-loved character from Muslim cultures in a book packed with jokes, riddles, and wisdom and paired with vibrant, theatrical illustrations.

Praise For Riding a Donkey Backwards: Wise and Foolish Tales of Mulla Nasruddin…

Is he a wise man or a fool? Though Nasruddin has many different names, the trickster about whom these stories are told is known throughout the Muslim world...Diorama-like miniature sets by artist Adl (Mabrook! A World of Muslim Weddings) breathe energy and humor into the tales.
—Publishers Weekly

In Adl's illustrations, Nasruddin has a long white cottony beard and wears a turban. Her use of electric-bright colors (orange, green, yellow, blue) exemplifies Nasruddin's eccentricity, while photocollaged textures add further interest...These tales, full of jokes and wisdom, demonstrate why the wise fool is a perennially appealing character.
—Kirkus Reviews

Humor, trickery, wisdom, and advice—sage and otherwise—infuse this collection of 21 brief tales starring Mulla Nasruddin, a beloved iconic character of Muslim folklore. The simple, clipped narrations are witty and conversational in tone, facilitating successful reading by the target audience and easy-to-comprehend listening (this is a fine readaloud for groups)...Recommended for schools and public libraries.
—School Library Journal

This charming collection of 21 classic tales introduces children to a much-loved trickster character from Muslim tales, the "wise fool" found in stories from cultures around the world.
—Buffalo News

Sean Taylor is an author, storyteller, and teacher who has written numerous books for children, including The World Champion of Staying Awake, illustrated by Jimmy Liao, and Hoot Owl, Master of Disguise, illustrated by Jean Jullien. Sean Taylor divides his time between the U.K. and Brazil.

The Khayaal Theatre Company, based in the U.K., was cofounded by Luqman Ali and Eleanor Martin in 1997 to bring to life the poetry, stories, wisdom, imagination, and humor of Muslim cultures.

Shirin Adl, a British-Iranian illustrator of many books for children, says that the Mulla Nasruddin stories were an important part of her childhood, and that she is delighted to illustrate them for a new generation of children. She lives in England.
or support indie stores by buying on