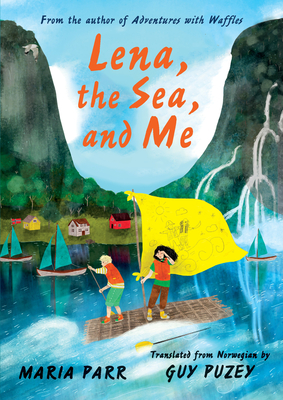 Lena, the Sea, and Me

In a charming sequel to Adventures with Waffles, Trille and Lena navigate the rough waters of friendship when a new soccer coach and a new girl in school disrupt their seaside escapades. Trille and Lena may be getting older, but they still find everyday adventure--and trouble--in their coastal village, including sinking every raft they build, getting little sisters stuck up flag poles, and attending those dreaded music lessons. But that's not all. The arrival of a less-than-encouraging new soccer coach is putting twelve-year-old Lena's goalkeeping career in doubt. And Trille is wondering how to impress the girl who has just joined his class. As the best friends battle the elements and their own emotions, one thing is for sure: they're not giving up, not if Lena has anything to do with it In Maria Parr's follow-up to Adventures with Waffles, the acclaimed author returns to Mathildewick Cove with a rib-tickling story of growing up.

Maria Parr is a celebrated Norwegian author whose books have been published in more than thirty countries worldwide. Her debut novel, Adventures with Waffles, won several awards and was made into a popular children's television series in Norway and adapted for the stage. Her second novel, Astrid the Unstoppable, was also made into a theater production. Maria Parr lives in Norway. Guy Puzey began translating Norwegian literature after studying the language at the University of Edinburgh and now works at the university as a researcher and teacher. He is the translator of three books by Maria Parr: Adventures with Waffles; Lena, the Sea, and Me; and Astrid the Unstoppable. Guy Puzey grew up in the Highlands of Scotland, just a short but cold swim away from Norway.
Loading...
or support indie stores by buying on