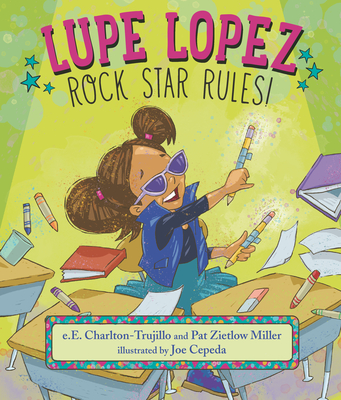 When a sassy drummer starts kindergarten, the rules of school cramp her style. What’s a young rock star to do?

When Lupe Lopez struts through the doors of Hector P. Garcia Elementary in sunglasses with two taped-up Number 2 pencils—drumsticks, of course—poking from her pocket, her confidence is off the charts. All day, Lupe drums on desks, tables, and chairs while Ms. Quintanilla reminds her of school rules. Lupe has her own rules: 1) Don’t listen to anyone. 2) Make lots of noise. ¡Rataplán! 3) Have fans, not friends. But with her new teacher less than starstruck, and fans hard to come by, Lupe wonders if having friends is such a bad idea after all. Can it be that true star power means knowing when to share the spotlight? With its spirited illustrations and a simple text threaded through with Spanish words, this picture book is proof positive that being a strong girl moving to her own beat doesn’t have to mean pushing others away.

Spanish-inflected onomatopoeia describing drumbeats jumps out of the text and makes a bold statement, just like Lupe herself. . . . . Cepeda’s full-bleed spreads are immersive and inviting. . . An instructive story about balancing big dreams with real life, with a charming heroine to root for.

Employing Spanish words and onomatopoeia, and Cepeda’s full-bleed, sunshine-bright cartoons, this story assures even the most exuberant kid that they can master the big social-emotional task of kindergarten: holding onto individuality while becoming part of a community.
—Publishers Weekly

Lupe Lopez: Rock Star Rules is a fun, fresh addition to the back-to-school picture book canon. It’s perfect for young readers who march to the beat of their own drums but may benefit from a gentle reminder to respect the needs of others around them. . . Lupe is the brainchild of a picture book dream team. . . Together, Charlton-Trujillo, Zietlow Miller and Cepeda have created an unforgettable heroine who will leap off the page and right onto your bookshelf.
—BookPage

e. E. Charlton-Trujillo is a filmmaker and author of the award-winning young-adult novel Fat Angie and its sequels, Fat Angie: Rebel Girl Revolution and Fat Angie: Homecoming. They live in California.

Pat Zietlow Miller is the author of the New York Times best-selling Be Kind, My Brother the Duck, and other books for young readers. She lives in Madison, Wisconsin.

Joe Cepeda is an award-winning illustrator of more than thirty books for children. Born and raised in East Los Angeles, he lives in Southern California.
Loading...
or support indie stores by buying on