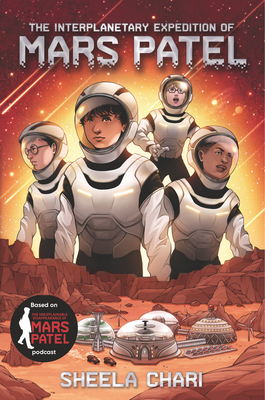 The Interplanetary Expedition of Mars Patel

Mars is on Mars! But as techie colonists and scrappy rebels clash, can Mars and his friends survive long enough to discover the planet’s dark secrets? Based on Season 2 of the Peabody Award–winning podcast.

Six months ago, Mars Patel boarded a spaceship to travel to Oliver Pruitt’s colony on the planet Mars, and now he’s finally there. The journey gave Mars lots of time to bond with his copilots, but Mars and his new friends soon discover that Pruitt’s colonists aren’t the only people living on the inhospitable planet. A splinter group, led by the mysterious Fang, are desperate to go back to Earth—and they don’t care who they hurt in the process. Amid the slick subterranean colony filled with rules and giant, terrifying tardigrades who poop a lot, Mars searches for answers about Oliver Pruitt’s supposed plans—and the real reason the eccentric billionaire has been so invested in him all this time. Featuring thrilling technology, a diverse cast, and a gripping plot, this extraterrestrial adventure, a follow-up to The Unexplainable Disappearance of Mars Patel, is also based on the popular and award-winning podcast.

Praise For The Interplanetary Expedition of Mars Patel…

Action-packed. . . . [readers] will be drawn in as Mars has to make some tough choices while also learning the shocking truth behind why he was selected for this mission in the first place.
—Kirkus Reviews

The do-or-die space action is thrilling, and the themes of teamwork and perseverance remain strong. . . . Hand this series to readers who crave sci-fi adventure and mystery.
—School Library Journal

Sheela Chari is the author of The Unexplainable Disappearance of Mars Patel, the first book in this series, as well as Finding Mighty and Vanished, an Edgar Award nominee. She lives with her family in New York.
Loading...
or support indie stores by buying on