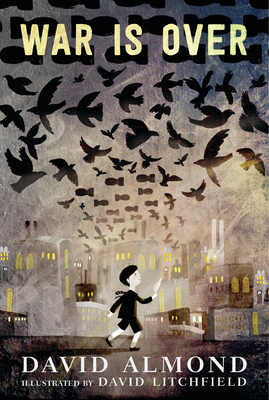 Transcending its time and period, this moving and lyrical story, beautifully illustrated, explores the fear and hope of children in time of war.

It’s 1918, and war is everywhere. John’s father is fighting in the trenches far away in France, while his mother works in a menacing munitions factory just along the road. His teacher says that John is fighting, too, that he is at war with enemy children in Germany. One day, in the wild woods outside town, John has an impossible moment: a dreamlike meeting with a German boy named Jan. John catches a glimpse of a better world, in which children like Jan and himself can one day scatter the seeds of peace. David Almond brings his ineffable sensibility to a poignant tale of the effects of war on children, interwoven with David Litchfield’s gorgeous black-and-white illustrations.

Praise For War Is Over…

This slim volume contains depths that adults will wish to explore with young readers, from allusions to "Bread and Roses" to the meaning of the white feathers used to shame pacifists but that the scorned Uncle Gordon proudly claims as things of beauty. The story offers rich material for considering the impact of war on those on the homefront as well as the toll rabid conformity and hatred of the Other takes. A testament to essential humanity.
—Kirkus Reviews

Litchfield's art makes good use of positive and negative space that helps to focus attention on particular objects (such as doves that turn into bombs), as well as convey mood through the use of light and dark. Together with Almond's text, the drawings help to illuminate children's feelings about conflict and should spark conversations about war and peace.
—Booklist

This story is timeless and relevant for today's world. Grayscale illustrations accompany and support the narrative, showing readers that in war there is often no black and white, only the grey areas where each person must follow their own convictions and sense of what is right.
—School Library Connection

David Almond is the acclaimed author of many award-winning novels for children, including Skellig, The Tightrope Walkers, and The Tale of Angelino Brown. He has also collaborated with many celebrated artists, including Polly Dunbar, Dave McKean, and Oliver Jeffers, on fiction for younger readers. David Almond's books are beloved all over the world, and in 2011 he was the recipient of the prestigious Hans Christian Andersen Award. He lives in England.

David Litchfield first started to draw when he was very young, creating comics for his older brother and sister. Since then his work has appeared in magazines, newspapers, and books and on T-shirts. His first picture book, The Bear and the Piano, won the Waterstones Children's Book Prize. He is the illustrator of When Paul Met Artie: The Story of Simon & Garfunkel by G. Neri. He lives in England.
Loading...
or support indie stores by buying on