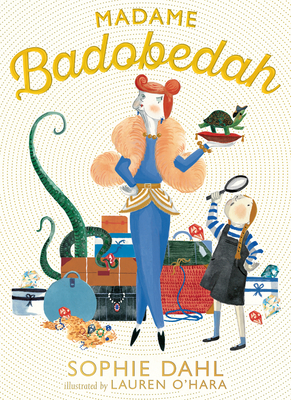 Who is Madame Badobedah? Mabel sets out to prove that an eccentric new hotel guest is really a supervillain in this witty storybook about an intergenerational friendship.

There’s a strange new guest at the Mermaid Hotel — a very old lady with a growly voice, bags stuffed with jewelry and coins and curiosities, and a beady-eyed pet tortoise. Mabel, whose parents run the hotel, is suspicious. Who is this “Madame Badobedah” (it rhymes with "Oo la la") who has come to stay indefinitely and never has any visitors? To find out, Mabel puts on her spy costume and observes the new guest. Conclusion? She must be a secret supervillain hiding out from the law. The grown-ups think Madame Badobedah is a bit rude — and sad — but when she invites “dahlink” Mabel for a cup of forbidden tea and a game of pirates, the two begin a series of imaginary adventures together, and Mabel realizes that first impressions can sometimes be very wrong. Conjuring two quirky heroines that young readers will love, Sophie Dahl adds her talented voice to a grand tradition of books that celebrate the alliance of the old and young in the face of humdrum adults, while Lauren O’Hara’s illustrations are as packed with intriguing details as Madame Badobedah’s suitcases.

Dahl's voice for Mabel is young and amusingly opinionated. O'Hara's watercolor illustrations have a retro feel, with lighthearted views of the seaside hotel, Mabel and Madame—and some mermaids...The appeal of Mabel's fanciful take on the older woman's past grows along with their friendship, transforming the poignancy and losses of old age into something sweetly adventuresome and glamorous. A warmhearted tale of intergenerational connection.
—Kirkus Reviews (starred review)

Mabel is surprised when Madame Badobedah invites her in for tea, and a friendship begins between the two. Their imagined adventures and histories give way to confessions of truths and secrets, all of which play out in the glorious watercolor illustrations, shimmering with beachy hues, whimsy, and enchanting details. Youngsters ready for longer stories should pack their bags for the Mermaid Hotel without delay.
—Booklist (starred review)

Dahl’s yarn unspools with impressive assurance as two strong female characters grapple with each other, and both emerge victorious.
—Publishers Weekly (starred review)

The Mermaid Hotel feels like somewhere you can go, at a time when you are allowed to go nowhere, shook from Mabel's imagination and Dahl's deep rememberings... Everything is sunnier and brighter and splashed with possibility. Mabel knows how to get there.
—Romper

Sophie Dahl is the best-selling author of four books for adults and two books for children. The Worst Sleepover in The World follows her children’s debut, the critically acclaimed Madame Badobedah.
She has written nonfiction essays for Vogue, British Vogue, the New York Times, the Guardian, and the Sunday Times (London). She has judged the Women’s Prize for Fiction and British Vogue’s Young Talent Contest. She is also a contributing editor and monthly columnist at House & Garden magazine.
Madame Badobedah was nominated for the Kate Greenaway Medal, received a Parents’ Choice Gold Award, and was selected as a 2019 Best Children’s Book by both the Guardian and the Sunday Times (London).

Lauren O’Hara is the illustrator of Hortense and the Shadow and The Bandit Queen. She lives in a converted church in Dublin, Ireland.
Loading...
or support indie stores by buying on