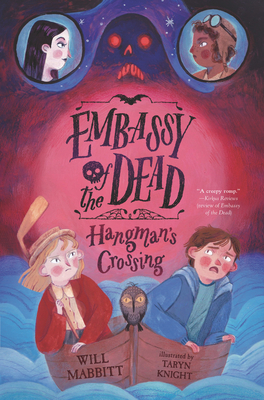 Embassy of the Dead

Jake is in a race against time to foil a demon-riddled plot to destroy earth—what a way to start his new job at the Embassy of the Dead! The second book of this spookily funny trilogy.

In return for helping Stiffkey the ghost pass into the Afterworld, Jake Green has been awarded an official position at the Embassy of the Dead, a job he didn’t ask for and, to be honest, doesn’t necessarily want. But saying no to the Embassy isn’t really an option, so now Jake must journey even deeper into the mysterious world of ghosts. What should be a routine Undoing takes a turn when Jake overhears a plot to destroy the very fabric between the worlds of the living and the dead. Can he do the impossible and stop the terror that creeps in the Eternal Void? With the help of his ghostly gang—hockey stick–wielding Cora and Zorro the fox—he’s going to try. Hijinks from beyond the grave will tingle readers’ spines and tickle their funny bones as the Embassy of the Dead trilogy continues.

Praise For Embassy of the Dead: Hangman's Crossing…

Creepy, scratchy illustrations spook readers at every few turns of the page. . . This sequel delivers, expanding the world of the series in smart and engaging ways that will have fans pleased and newcomers going back to read the first volume. . . . A blossoming, chill-inducing series.
—Kirkus Reviews

Creepiness and humor are incorporated well with a satisfyingly twisty mystery that keeps pages turning. . . . A spooky second installment that will satisfy fans of the first, and leave them excited for ­further adventures.
—School Library Journal

Will Mabbitt is the author of The Unlikely Adventures of Mabel Jones, illustrated by Ross Collins. His overactive imagination used to get him in trouble but now helps him do his job. He enjoys loitering in graveyards looking for ideas. Will Mabbitt lives with his family on the south coast of England.

Taryn Knight is a self-taught illustrator who grew up homeschooled in the eastern grasslands of Colorado. She lives in Colorado with her friends Delilah and Rosie (a terrier and tabby cat, respectively).
Loading...
or support indie stores by buying on