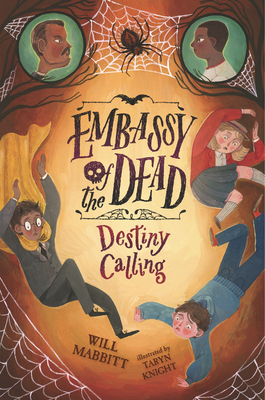 Embassy of the Dead

Destiny is calling—but does it have the right number? Jake and his friends are fated to save the Afterworld from a powerful demon in the third installment of this delightfully creepy series.

Jake Green and his friends have managed to save the world from the followers of Fenris twice now, which should be more than enough. But Jake, Cora, and Sab are suddenly given a new, secret mission. It seems one last would-be traitor is still hidden in the world of the Embassy, and it’s up to Jake and his friends to take care of him—permanently. All the signs point to Jake being the Chosen One for this dangerous task, especially since he’s armed with the ancient, Eternal Void–summoning tooth he found on his last trip to the Afterworld. But the more time the three friends spend on their dubious quest, the more Jake wonders if he’s better off making his own destiny. The latest adventure in this fast and funny series delivers plenty of chills, twists, and heart.

Praise For Embassy of the Dead: Destiny Calling…

The strongest entry yet, building on its predecessors with effective ease. The laughs are sharp, the pacing is strong, the horror is effective, and the characters continue to impress and evolve. . . . A stirring entry in a series that’s come into its own.
—Kirkus Reviews

Will Mabbitt is the author of The Unlikely Adventures of Mabel Jones, illustrated by Ross Collins. His overactive imagination used to get him in trouble but now helps him do his job. He enjoys loitering in graveyards looking for ideas. Will Mabbitt lives with his family on the south coast of England.

Taryn Knight is a self-taught illustrator who grew up homeschooled in the eastern grasslands of Colorado. She lives in Colorado with her friends Delilah and Rosie (a terrier and tabby cat, respectively).
Loading...
or support indie stores by buying on