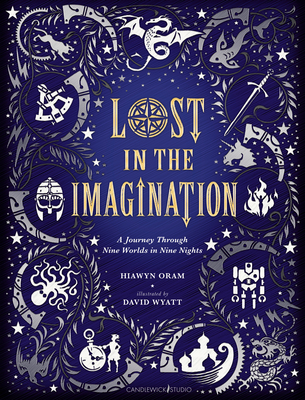 Lost in the Imagination

A Journey Through Nine Worlds in Nine Nights

Take a trip into the fantastical world of the imagination in this lavishly illustrated gift book.

Enter the elaborate “found” notebooks of the formerly fact-bound professor Dawn Gable and follow her on nine nightly journeys to extraordinary worlds. From King Arthur’s Round Table at Camelot to the majestic hall of slain heroes in Asgard, visit marvelous lands from myth, legend, and fairy tale. Intricate vistas and diagrams usher readers into a city of intelligent machines, the ancient African city of Kor, the miniature world of Lilliput, the flying island of Laputa, a mountainous home of mythical beasts, the primeval island of Buyan, the island of Atlantis, Captain Nemo’s Nautilus, and more. A mesmerizing gift for anyone who believes in the transformative power of stories, this is a book that readers will pore over again and again.

Hiawyn Oram has been writing children’s books for forty years and has published more than one hundred books, including Snowboy and the Last Tree Standing. She grew up in South Africa and now lives and works in West London.

David Wyatt began illustrating at the age of seventeen, working for the British comic 2000 AD. He has illustrated ever since, when not distracted by music or trees. He lives in England.
Loading...
or
Not Currently Available for Direct Purchase