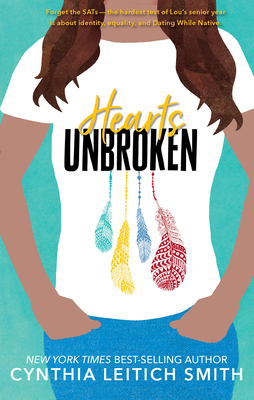 When Louise Wolfe’s first real boyfriend mocks and disrespects Native people in front of her, she breaks things off and dumps him over e-mail. It’s her senior year, anyway, and she’d rather spend her time with her family and friends and working on the school newspaper. The editors pair her up with Joey Kairouz, the ambitious new photojournalist, and in no time the paper’s staff find themselves with a major story to cover: the school musical director’s inclusive approach to casting The Wizard of Oz has been provoking backlash in their mostly white, middle-class Kansas town. From the newly formed Parents Against Revisionist Theater to anonymous threats, long-held prejudices are being laid bare and hostilities are spreading against teachers, parents, and students — especially the cast members at the center of the controversy, including Lou’s little brother, who’s playing the Tin Man. As tensions mount at school, so does a romance between Lou and Joey — but as she’s learned, “dating while Native” can be difficult. In trying to protect her own heart, will Lou break Joey’s?

Cynthia Leitich Smith is the best-selling, acclaimed author of the Tantalize series and the Feral series. She is an enrolled member of the Muscogee (Creek) Nation and is on the advisory board of We Need Diverse Books. She lives in Austin, Texas.

Blending teen romance with complex questions of identity, equality, and censorship, this is an excellent choice for most collections.
—School Library Journal (starred review)

In a time when #ownvoices stories are rising in popularity among YA readers, this brings an insightful story to the conversation...this is truly a thought-provoking and educational novel.
—Booklist

Louise...is believable in her own missteps, and her younger brother’s moral quandary—he’s unsure if he wants to stay in the play after finding out about L. Frank Baum’s virulent anti-Native prejudice—is compellingly explored...a revealing account of a bigotry experience that sometimes gets overshadowed by others, though, and readers will sympathize with Louise’s frustrations.
—Bulletin of the Center for Children's Books

Smith effectively presents the continuous microaggressions Lou faces as a young Native woman alongside the central narrative arc of the school play.
—The Horn Book

Smith depicts the Wolfes’ warm family life as a stable foundation as Hughie and Lou each confront challenges, and she is especially successful at portraying the camaraderie and conflicts of the newspaper staff...a thought-provoking work of realistic teen fiction.
—Publishers Weekly Online
or
Pre-Order Now
Copyright © 2020 American Booksellers Association