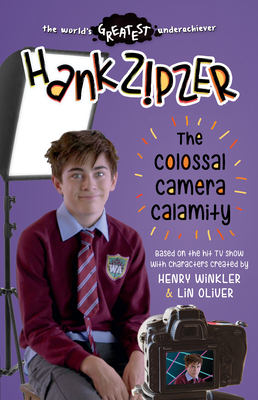 Will Hank’s school photo be another disaster on his parents’ shelf of shame? The latest novelization of the TV series based on the best-selling books by Henry Winkler and Lin Oliver. As seen on Universal Kids!

Hank hates school photos. Something always goes wrong just before the FLASH — a spider lands on his nose, he bends down to tie his shoe, or his “smart-guy” pose ends up looking like a “nose-picker” shot. But this year, Hank is careful to take every possible precaution to ensure he takes a good picture. Unfortunately, between messy art class, a chocolate cake, and school bully McKelty, Hank’s picture-perfect appearance is in jeopardy. He’ll have to do some quick thinking (and quick changing) if he wants to get a good portrait before the photographer packs up. This likable character created by Henry Winkler and Lin Oliver — inspired by Winkler's own childhood — returns for another side-splitting adventure in the popular series set in a dyslexia-friendly font.

Lin Oliver is a writer and producer of movies, books, and television programs for children. She lives in Los Angeles with her husband, Alan, and their three children.
Loading...
or
Not Currently Available for Direct Purchase