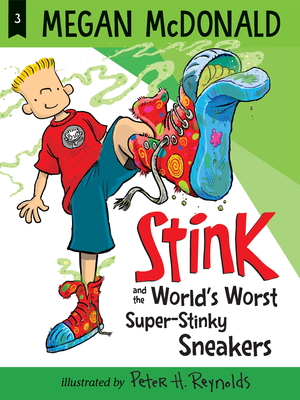 Follow your nose to a hilarious Stink-fest no kid will want to miss!

Stink Moody’s class is going on a field trip to the Gross-Me-Out exhibit at the science museum, and he can’t wait to see the Vomit Machine, the Burp-O-Meter, and the Musical Farts. Best of all, when he gets to the Everybody Stinks exhibit, Stink discovers that his very own nose has amazing sniffing abilities — and he learns that some people have real jobs sniffing stuff for NASA! Soon the junior olfactory wiz is engrossed in toilet water, corpse flowers, and all things smelly, and he and Sophie of the Elves are set to go toe-to-toe in a stinky sneaker contest. Will Stink’s fetid footwear be foul enough to earn him a Golden Clothespin Award? Stink’s loyal fans will be holding their breath for his latest outrageous solo adventure.

Praise For Stink and the World's Worst Super-Stinky Sneakers…

Fans of Judy Moody's second-grade brother will be delighted by this third edition of his adventures, featuring familiar characters and plenty of new information about toilet water, corpse flowers and other smelly substances, as well as a surprising career opportunity.
—Kirkus Reviews

Stink is a delightful protagonist, comical and bright, and McDonald cleverly imparts information on smells…A funny book worthy of being added to almost any collection.
—School Library Journal

This may be just the thing to get a non-reader interested in tackling a novel.
—ParentClick.com

Megan McDonald is the award-winning author of all the Judy Moody and Stink books. Before she became an author, she worked in museums, libraries, and bookstores. She lives in Sebastopol, California.

Peter H. Reynolds is the illustrator of the Judy Moody and Stink books and the author-illustrator of The Dot, Ish, So Few of Me, The North Star, and Rose’s Garden. He lives in Dedham, Massachusetts.
Loading...
or support indie stores by buying on