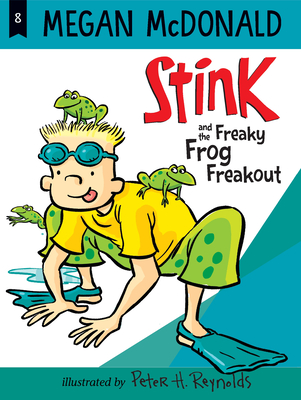 Stink and the Freaky Frog Freakout

Croak! Squeenk! Ribbet! After a close encounter with a mutant amphibian makes him freaky for frogs, water-shy Stink becomes a swimming success.

Stink may be super smart, and Stink may be uber clever, but he’s been in the Polliwog swim class frog-ever and he still can’t bear to put his face in the water. Why would he want a geyser up his nose, on purpose? But then something weird happens: Stink starts to see frogs everywhere — in the locker room, in his boot, in the bathtub. And when a freaky blue frog licks his arm, his froggy senses start tingling! He has an urge to slurp up raisins (that look like flies). He can’t wait to play in the rain and mud. He’s a wiz at identifying frog calls. And he has become very interested in the local frog population. Could it be that Stink is turning into . . . the amazing Stink-Frog, fighter of slime? Pree-eep! Craw-awk!

Praise For Stink and the Freaky Frog Freakout…

Brief, cheery, oversized text and lot of cartoonish black-and-white illustrations...make this a good choice for newly independent readers...Young readers with a fondness for amphibians will jump all over this one.
—Kirkus Reviews

Megan McDonald is the creator of the popular and award-winning Judy Moody and Stink series. She is also the author of three Sisters Club stories, Ant and Honey Bee: A Pair of Friends at Halloween, and many other books for children. She lives in Sebastopol, California.

Peter H. Reynolds is the illustrator of the Stink and Judy Moody books and the author-illustrator of The Dot, Ish, Sky Color, So Few of Me, The North Star, and Rose’s Garden. Born in Canada, he now lives in Dedham, Massachusetts.
Loading...
or support indie stores by buying on