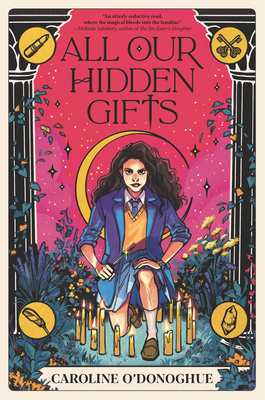 All Our Hidden Gifts (The Gifts)

Maeve’s strangely astute tarot readings make her the talk of the school, until a classmate draws a chilling and unfamiliar card—and then disappears.

After Maeve finds a pack of tarot cards while cleaning out a closet during her in-school suspension, she quickly becomes the most sought-after diviner at St. Bernadette’s Catholic school. But when Maeve’s ex–best friend, Lily, draws an unsettling card called The Housekeeper that Maeve has never seen before, the session devolves into a heated argument that ends with Maeve wishing aloud that Lily would disappear. When Lily isn’t at school the next Monday, Maeve learns her ex-friend has vanished without a trace.

Shunned by her classmates and struggling to preserve a fledgling romance with Lily's gender-fluid sibling, Roe, Maeve must dig deep into her connection with the cards to search for clues the police cannot find—even if they lead to the terrifying Housekeeper herself. Set in an Irish town where the church’s tight hold has loosened and new freedoms are trying to take root, this sharply contemporary story is witty, gripping, and tinged with mysticism.

Praise For All Our Hidden Gifts (The Gifts)…

Ghostly menace, queer liberation, and sweet nonbinary romance all find room in this modern Irish contemporary. . . O’Donoghue (Scenes of a Graphic Nature) infuses fierce integrity and an understanding of self-worth into a hilarious voice. . .the novel’s brilliant connections between friendship, boundaries, and the vulnerability of loneliness provide a vibrant compass for fans of Sarah Rees Brennan or Derry Girls.
—Publishers Weekly (starred review)

The book’s ending leaves the door open for a sequel, and readers are sure to clamor for one. . . . All Our Hidden Gifts is grounded and realistic, even when it’s got a foot in the supernatural, and it captures the complex, emotional nature of teen relationships with ease.
—BookPage (starred review)

With a deft hand, O’Donoghue crafts a narrative that is steeped in both classic gothic atmosphere and contemporary representation. . . . Stefanie Caponi’s tarot card illustrations are hauntingly perfect companions to the text. Much like the novel, the cards appear deceptively familiar at first glance. The stakes are high, the narrative is nuanced, and the climax and resolution are refreshingly unexpected. Expect readers to fall into this blurred tale of the normal and the paranormal.
—School Library Journal

Fans of Derry Girls will immediately feel at home with these Irish Catholic schoolgirls who balance politics, religion, and adolescence with wry humor and sharp wit. While folkloric magic (it turns out, Maeve has more powers than just the ability to read tarot cards) is the central theme, O’Donoghue also weaves in elements of gender exploration, queer culture, and a nod to the evolving social climate in Ireland.
—The Bulletin of the Center for Children's Books

This atmospheric, witty, disarming tale is a page-turning dive into occult forces portrayed alongside teenage troubles. . . . Impeccable dialogue and true-to-life characters make this a great choice for YA readers with a mystical bent.
—The Horn Book

Maeve, the main character of this story, is conflicted. She is conflicted about the decisions she has made surrounding her friendships and conflicted about her place in society in general. . . .The story is well written and engaging. It also provides a perspective on how religious individuals, and the Irish community specifically, are working through the changing global perspectives of gender and gender fluidity. . . . This book is a recommended addition for high school readers interested in tarot, mysticism, and gender roles
—School Library Connection

“All Our Hidden Gifts is a magical surprise of a book, the perfect combination of heartfelt and thrilling, unpredictable and familiar. The startling and unique story lets us imagine and worry and love and reach for the truth right alongside Maeve. It is easy and exciting to get lost in this witchy, mysterious, and deeply layered story.”
—Corey Ann Haydu, author of OCD Love Story and Ever Cursed

“An utterly seductive read, where the magical bleeds into the familiar.”
—Melinda Salisbury, author of The Sin Eater’s Daughter

Whether you come for the mystery, the magical hijinks, or the intense teenage feelings, All Our Hidden Gifts has a lot to offer. It takes friendship seriously and treats its queer and diverse characters with empathy and respect, all while frolicking off on a somewhat batty supernatural adventure.
—NPR

Caroline O’Donoghue is an Irish author, journalist, and host of the acclaimed podcast Sentimental Garbage. She has contributed to Grazia, the Irish Times, the Irish Examiner, BuzzFeed, Vice, and The Times (London). She lives in London.
Loading...
or support indie stores by buying on