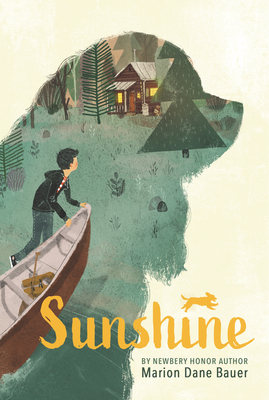 Set in the northern Minnesota wilderness, a timeless novel about a boy and his imaginary dog explores the legacy of guilt and blame—and what really constitutes a family.

Newbery Honoree Marion Dane Bauer evokes the “summer that changed everything” in the life of a boy growing up without a mother. Since as far back as Ben can remember, it’s been him, his devoted dad, and Sunshine—Ben’s little dog, who rarely leaves Ben’s side. It was Mom who did the leaving, and Ben’s about to spend a whole week with his suddenly present mother in the wilds of northern Minnesota. On the remote island she calls home, Ben will learn to canoe, weather the elements, and weigh a burning question: when will she come back to where she belongs? A must-read for dog lovers, children of divorce, and the imaginative and outdoorsy, Sunshine is a poignant, ultimately hopeful story about self-discovery, facing big realities, and finally, forgiving the things—and people—you can’t forget.

That Ben is hiding his anger beneath a multitude of fears feels authentic, and his deep need for the adoring Sunshine will resonate for dog lovers. Descriptive passages of the islands and the trio’s adventures in the Minnesota wilderness are sure to appeal to outdoorsy readers. But the central theme of the book, Ben’s sense of loss and abandonment, informs every part of the narrative as he vacillates between trying to connect with his mother and the anger that’s expressed in his shrugging off her touch. . . . A moving story about a boy and his dog and the solace a pet, real or imagined, can bring.
—School Library Journal

Bauer offers an imaginative and emotionally compelling take on the story of a boy and his dog here. Ben’s confusion over his mother’s departure and his desperation for the normality he thinks her return will bring are keenly and believably drawn, and even young readers new to the idea of symbolism will appreciate how the adorable and adoring Sunshine serves as more than just an imaginary friend.
—The Bulletin of the Center for Children's Books

Book groups will thrive with this title, as there is much character development and action upon which to reflect. This would be a strong title to consider for parent engagement as well.
—School Library Connection

It’s a tribute to Ms. Bauer’s skill as a writer that she allows the reader to share Ben’s divided state of mind. We know that Sunshine doesn’t exist, and at some level Ben knows it too, yet through him we can see and feel her. . . . When Sunshine slips out of Ben’s control, her defiance puts Ben in genuine danger. Ultimately he will have to choose between holding on to an imagined reality or accepting the painful truth that his mother reveals in this touching story of grief and forgiveness for readers ages 8-12.
—The Wall Street Journal

“In the beautiful Sunshine, a child spends a week on a remote northern island with the mother who abandoned him, determined to win her back. This almost unthinkably painful situation turns revelatory as both child and mother gradually realize their similarities. As in all of Marion Dane Bauer’s work, the graceful flow and cadence of her language convey a story that pierces the heart with pain and redemption in equal measure.”
—Alison McGhee, New York Times best-selling author

“Master storyteller Marion Dane Bauer gives us this luminous story of a boy and his mother and the dog that connects them. It’s about the islands we each carry in our hearts. It’s about forgiveness. It’s about the redeeming power of love, both real and imagined.”
—Kathi Appelt, author of the Newbery Honor Book The Underneath

“Set deep in the wilds of northern Minnesota, this beautifully written novel explores the bonds among a boy, the mother who left him long ago, and a dog like none we’ve ever seen. Sunshine gives us hope that we can find ways to bear devastating grief . . . until we grow wise enough to understand it and strong enough to forgive. Brave, honest, and full of heart, Sunshine is a book to cherish.”
—Susan Fletcher, author of Journey of the Pale Bear

This is a tender story, perfect for kids who are worried, scared, or wondering if they have to give up their versions of Sunshine as they grow up.
—The St. Paul Pioneer Press

Marion Dane Bauer is an award-winning author of more than one hundred books for young people, including the Newbery Honor Book On My Honor and The Stuff of Stars. A former faculty member of the Vermont College of Fine Arts MFA program in Writing for Children and Young Adults, she now writes full-time. Marion Dane Bauer lives in St. Paul, Minnesota.

1. On the second page, we learn that it has been a long time since Ben has seen his mom. How did you feel about that?

2. On page 11, Ben wonders, “How can you forget somebody so completely and yet recognize every bit?” How would you answer Ben’s question?

3. Sunshine came into Ben’s life when he was three, just after his mother left. Why do you think that happened?

4. How would you describe Ben’s mother and her life? Why do you think she chose that kind of life? Would you like to live like that? Why?

5. Ben reveals early in the book that he knows that Sunshine is not real, yet he treats her as if she were. He calls her, pats her, and even tries to save her life when he “sees” her go bounding down to visit a baby bear whose mother is close by. That last action could have cost him his life. How do you explain the difference between what he knows is true and what he thinks is true?

6. Had you ever heard of a daemon before? What kind of an animal would you choose for a daemon?

7. Ben sometimes feels embarrassed about things he does, such as saying to his mother “I’m very glad to meet you” or mistaking the call of loons for wolves. His mother laughs when he does these things, and he is both embarrassed and angry. How did you feel about her reactions?

8. Ben worries a lot about being a scaredy-cat and a “what-if kid.” Did you think he was unusually timid, or did his fears seem normal and understandable?

9. Making up stories is one of the things that Ben does to amuse himself and pass the time. How do his stories relate to his real life?

10. Do you like to make up stories? What kinds of things happen in your stories? On page 102, Ben’s mother says, “I can’t think of much that’s more important than the stories we tell ourselves.” What do you think she means by that?

11. Ben has one week to make his wish come true. What did you think would happen as a result of this week?

12. Ben’s parents are very different kinds of housekeepers. Ben’s dad is very neat and cleans the house from top to bottom every week, while his mother’s cabin is “messy, just plain messy” (page 35). Do these details tell you anything about their characters? Are you messy or neat?

13. Several times during this book, Ben says that Sunshine has left him. For instance, when Ben has taken the canoe out by himself and he leaves the island where he saw bears, Sunshine does not go with him. He thinks, “So Sunshine has decided to leave him. Why should he care? Let her do what she wants” (pages 113–114). What is happening here?

14. When Ben and his mother watch the island fi re while moored offshore in her canoe, Ben sees that the fi re is simultaneously beautiful and terrible. How can something be both? Can you think of anything else that is both?

15. Sunshine doesn’t appear in the canoe while they are waiting. “She might as well have burned up in the fi re. . . . He knows, of course, it’s not possible for an imaginary dog to burn up in a real fi re. But maybe what happened is even worse. Maybe she burned up in his mind” (pages 170–171). How could that have happened?

16. Ben is afraid that the island burned because of the fi re he made when he was lost, but his mother thinks it was probably because of a lightning strike. Which do you think it was? Does it matter?

17. Do you think Ben’s mother did the right thing in leaving him when he was three? Do you think her own abusive childhood infl uenced her decision? What do you think she should have done?

18. Were you surprised that Ben wants to return to the island next summer? Would you want to?