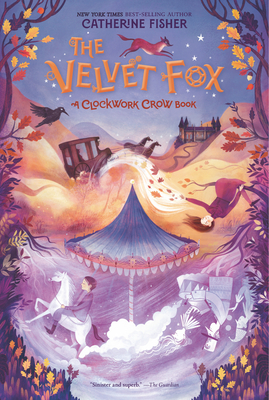 In a magical sequel to the award-winning The Clockwork Crow, Seren and Tomos think they’ve bested the fairies who tried to steal them away forever—until Tomos makes the mistake of saying this aloud.

After rescuing her godbrother Tomos from fairy enchantment, orphan Seren Rhys wants nothing more than to enjoy her new life at the charming manor house called Plas-y-Fran. But when Tomos thoughtlessly challenges the fairies, a mysterious new governess arrives in a gust of leaves. Seren has always wanted an education, but Mrs. Honeybourne doesn’t believe that girls have the right to one, and Seren’s family seems strangely intent upon agreeing with anything the governess says. As dangerous figures from a magical toy carousel stalk the house, Seren calls upon her old friend the Clockwork Crow for help. Yet when faced with the Velvet Fox, a creature even the Crow fears, Seren will need to use her smarts to overcome the dangers around her and protect what she loves. Brimming with Welsh folklore and atmosphere, Catherine Fisher’s latest tale of family, pluck, and fairy magic will delight readers—and wrap them in its spell.

Praise For The Velvet Fox…

It’s a delight to drop back into Seren’s unusual world; the manor house is alternately cozy and menacing, and there are some genuinely chilling moments and creepy characters. A splendid sequel spotlighting the mysterious magic of true friendship.

This sequel maintains the previous book’s classic British feel with a vaguely historical timeframe and intriguingly tricksy faery magic. . . this has a charming autumn setting, and the snarky Crow is once more a hilarious addition to an otherwise nail-biting tale.
—The Bulletin of the Center for Children's Books

Catherine Fisher is the author of The Clockwork Crow as well as the New York Times best-selling Sapphique and Incarceron. An acclaimed novelist and poet, she has written many fantasy books for young people, including the Oracle Prophecies series. In 2011 she was appointed the inaugural Young Person’s Laureate for Wales. Catherine Fisher lives in Wales.
Loading...
or support indie stores by buying on