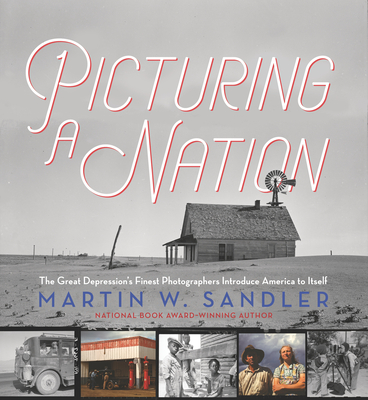 The Great Depression’s Finest Photographers Introduce America to Itself

In an exquisitely curated volume of 140 full-color and black-and-white photographs, Martin W. Sandler unpacks the United States Farm Security Administration’s sweeping visual record of the Great Depression. In 1935, with the nation bent under unprecedented unemployment and economic hardship, the FSA sent ten photographers, including Walker Evans, Dorothea Lange, and Gordon Parks, on the road trip of a lifetime. The images they logged revealed the daily lives of Southern sharecroppers, Dust Bowl farmers in the Midwest, Western migrant workers, and families scraping by in Northeast cities. Using their cameras as weapons against poverty and racism—and in service of hope, courage, and human dignity—these talented photographers created not only a collective work of art, but a national treasure. Grouped into four geographical regions and locked in focus by rich historical commentary, these images—many now iconic—are history at its most powerful and immediate. Extensive back matter includes photographer profiles and a bibliography.

Praise For Picturing a Nation: The Great Depression’s Finest Photographers Introduce America to Itself…

This powerful collection will challenge many pre-held ideas about life in the early-20th century and leave a lasting impression on readers. . . . This is a great example of the power of ­visually documenting history.
—School Library Journal (starred review)

The greatest value of this effort may be in reaching those who just browse the beautifully reproduced images that are outstanding in depicting both challenges and the heroic human response in a difficult time. . . . Stunning.
—Kirkus Reviews (starred review)

Sandler touches on historical and social circumstances of the time, including racism and economic disparities, the power and artistic merits of photography, and the particular talents of those behind the lens. . . . Meticulously researched and documented, this enlightening history, distinct from Sandler's The Dust Bowl through the Lens (2009), will captivate readers and photography fans.
—Booklist (starred review)

Beautifully reproduced images in both black-and-white and color, with informative captions and lively quotations accompanying many of them, augment Sandler’s authoritative and elegantly written text. Add this fine volume to other superb accounts of the Great Depression.
—The Horn Book (starred review)

It is not often that I read a book and all I can say is, "Wow!" This is such a book. . . . Not only are the photographs striking, Sandler's surrounding narrative of the events, the photographers, and the history of this time period is mesmerizing. The content of these pages tells the story of a work of love and of art by a group of people from all across America that may never be recreated. I cannot praise this title enough.
—School Library Connection (starred review)

Though the photographs, organized geographically, speak for themselves, Sandler’s choice of framing materials—quotes from the artists and photography critics—affirm the images’ importance as historical documents over what makes the images “good.” It’s a useful resource, collecting images that continue to define certain national visions and mythologies (small towns as “America’s Heartland”; farmers as the country’s “backbone”).
—Publishers Weekly

Martin W. Sandler has written more than seventy books for children and adults, including the National Book Award–winning 1919: The Year That Changed America, The Whydah: A Pirate Ship Feared, Wrecked, and Found, Apollo 8: The Mission That Changed Everything, and The Impossible Rescue: The True Story of an Amazing Arctic Adventure. He lives in Massachusetts.
Loading...
or support indie stores by buying on