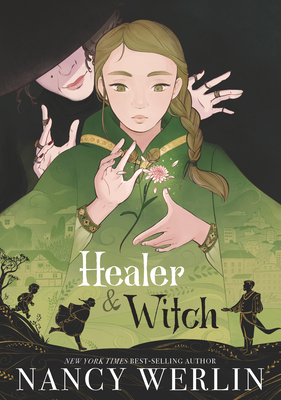 Nancy Werlin’s first story for middle-grade readers tackles and transcends traditional fantasy tropes: can a young woman gifted with magic learn to manage her powers—and claim her strength—without violence? Sylvie and her mother and grandmother are beloved, trusted healers in their medieval French village, though some whisper that fifteen-year-old Sylvie and her grand-mere deal in more than herbs and medicines. Perhaps they’re a bit . . . witchy? After her grandmother dies, and an attempt to use magic to heal her mother’s grief brooks tragic consequences, Sylvie leaves her village in search of a teacher. The journey subjects her to strange alliances, powerful temptations, danger, and deceit. In the end, there may be only one wise woman Sylvie can trust in a world that would define her limits: herself. Beautifully crafted, this quietly powerful work for younger readers assures a whole new audience for an established author.

Praise For Healer and Witch…

Werlin’s first foray into middle grade is a thrilling and suspenseful experience; there are twisting reveals and adventure aplenty, though the story isn’t afraid to stop for lovely moments of quiet contemplation and recollection along the way. A budding, respectful romance and hints of deeper powers will have readers hoping for a sequel. It’s well worth joining kind and clever Sylvie on her harrowing journey of discovery.
—Booklist (starred review)

A delightful page-turner that will entice readers of historical fiction and fantasy alike. It’s a refreshing stand-alone novel with a resilient protagonist who realizes the greatest magic of all is being true to oneself. . . . Thoroughly enjoyable and engaging, filled with magic, mystery, strength, and love.

An introspective historical fantasy . . Werlin’s gentle reflection on trauma and healing, the ethics of power, and seemingly dual natures explores Sylvie’s place in the world and her relationship to those she cares for.
—Publishers Weekly

Gracefully explores themes of identity, family and belonging. . . Werlin (Zoe Rosenthal Is Not Lawful Good) brings compassion and complexity to her depictions of the relationships between characters, challenging standard notions of good and evil. . . . Although Werlin skillfully evokes Healer and Witch's period setting, Sylvie's journey of self-discovery and its accompanying themes of female empowerment are timeless.

Against the backdrop of a turbulent era Nancy Werlin spins a sophisticated coming-of-age story in 'Healer & Witch,' a novel for readers ages 9-12 that is set in France. . . . a properly inventive, historically respectful story with a touch of magic (and romance) in its realism.
—The Wall Street Journal

Nancy Werlin (she/her) is the author of eleven books for teens, including Zoe Rosenthal Is Not Lawful Good, the National Book Award Finalist The Rules of Survival, the Edgar Award winner The Killer's Cousin, and the New York Times bestseller Impossible. Nancy Werlin lives outside Boston.
Loading...
or support indie stores by buying on