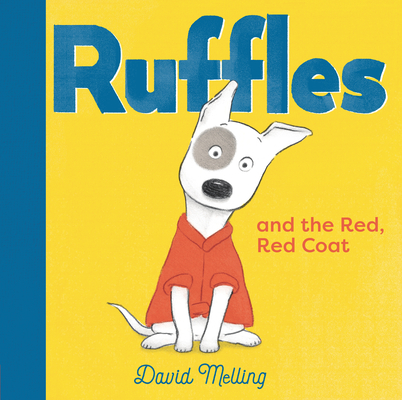 Ruffles and the Red, Red Coat

Join in with Ruffles as he faces all the trials and tribulations of toddler life in this brightly colored new picture book series from award-winning author and illustrator David Melling.

As Ruffles learns about the world around him, he discovers there are lots of things he likes . . . and some things he doesn't! He loves scratching, digging, and chewing, but he does not like wearing his red coat on rainy days. No, no, no, no, NO! But when Ruffles wants to splash in puddles with his best friend, Ruby, he soon learns that sometimes wearing a raincoat is a very good idea after all.

Praise For Ruffles and the Red, Red Coat…

Small sequential drawings of Ruffles struggling to wriggle out of and back into the notorious red coat prove priceless. . . . A playful, endearing tale of canine friendship.
—Kirkus Reviews (starred review)

David Melling grew up in London with various siblings and a selection of animals, including a dog. It took him a while to decide what he wanted to do, but he never stopped drawing. He worked as a cel renderer and background artist in several animation studios before he began illustrating children’s books. His work includes the Hugless Douglas series and The Kiss That Missed, which was short-listed for the Kate Greenaway Medal. To date he has created around 150 books in over thirty languages. David Melling lives in Oxfordshire, England, with his wife and two children.
Loading...
or support indie stores by buying on