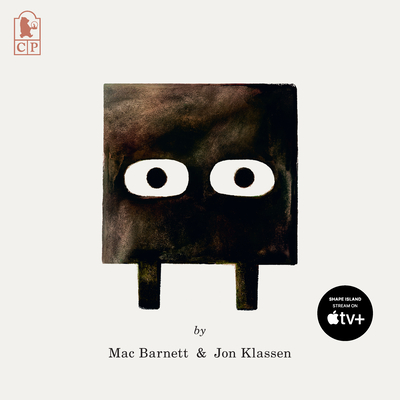 This book is about Square. Square spends every day taking blocks from a pile below the ground to a pile above the ground. This book is also about Square’s friend Circle. Circle thinks Square is an artistic genius. But is he really? With the second story in a trilogy of tales about Triangle, Square, and Circle, Mac Barnett and Jon Klassen nudge readers toward a more well-rounded way of looking at things. Understated and striking in its simplicity, this funny, thoughtful offering from two of today’s most talented picture-book creators emphasizes the importance of keeping your eyes — and your mind — open to wonder where others see only rubble and rocks.

Part of the Shapes Trilogy, the books that inspired Shape Island from Apple TV+

Praise For Square (The Shapes Trilogy #2)…

Square’s efforts to please are equal parts hilarious and cringeworthy, and the moment he topples over in exhaustion is comic gold. The story’s decidedly ambiguous conclusion leaves the door open for questions about what it means to be an artist—and that’s the whole point.
—Publishers Weekly (starred review)

This book takes a sweeter turn from its prankish predecessor in that Square works hard to create something for Circle, only to feel like he failed; but when Circle sees what he created, she is “beguiled” once more by his genius. Though this title will stand alone, children familiar with Triangle might recognize the extra layer of humor at the end when an unnamed narrator poses a game-changer of a question. A must purchase that will satisfy old fans and create new ones.
—School Library Journal (starred review)

Funny and lightly philosophical, Barnett’s story gets an extra punch of hilarity with Klassen’s minimalist graphite-and-watercolor artwork. A must for Triangle fans that will leave them wondering how this geometric drama will end.
—Booklist

With typically deceptive minimalism Klassen places a few flat, blocky shapes on the white pages to suggest the physical landscape, angling Square's body and glance to convey the emotional one. Humor is in the details: a bit of twig that catches on harried Square's head and stays there; the shadow that appears beneath Circle as she floats along through the air. For all its brevity, chockablock with philosophical topics to ponder and debate.
—Kirkus Reviews

Barnett’s text is funny and profound, raising philosophical questions about intent, genius, and truth. Klassen’s trademark eyes do a lot of emotive work amid the spare, fantastical set- ting. Angled lines (in the rocks, plants, and slanting rain) and white space direct readers’ own eyes across each page or spread, and short sentences, smart dialogue, and word repetition keep the story moving at a steady pace. Readers looking for a compelling read-aloud will not be disappointed.
—The Horn Book

There’s a ’60s flair to this story of friendship and artistry; the text is spare yet robust, with a lot of meaning behind the carefully selected words, and the open-ended conclusion will give kids much to discuss. Klassen’s watercolor, graphite, and digital art is animation ready, with simple textured shapes against white backgrounds...While the story could provoke discussions about expectations and friendships, this title is most at home as an original entry in art curricula.
—Bulletin of the Center for Children's Books

Square attempts to make a Circle sculpture that will be as perfect as his friend is...Children will no doubt find the results hilarious. The droll illustrations by the Niagara Falls, Ont., native Klassen, in subtle shades of gray, brown and blue, endow these friends with personality and Barnett's simple text is perfect.
—The Buffalo News

Droll, subdued and enigmatic, this second volume of a planned trilogy will delight children ages 5-9.”
—The Wall Street Journal

Mac Barnett is the author of numerous books for children, including four illustrated by Jon Klassen: The Wolf, the Duck, and the Mouse; Triangle; Sam and Dave Dig a Hole, winner of the E. B. White Read Aloud Award; and Extra Yarn, which won a Caldecott Honor and a Boston Globe–Horn Book Award. Mac Barnett lives in California.

Jon Klassen is the author-illustrator of I Want My Hat Back, a Theodor Seuss Geisel Honor Book; This Is Not My Hat, winner of the Caldecott Medal and the Kate Greenaway Medal; and We Found a Hat. He is also the illustrator of two Caldecott Honor books, Sam and Dave Dig a Hole and Extra Yarn, both written by Mac Barnett. Jon Klassen lives in Los Angeles.
Loading...
or support indie stores by buying on