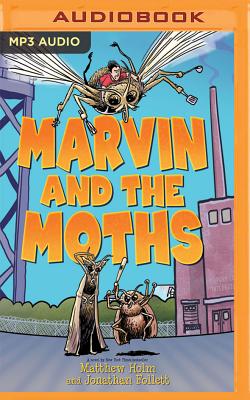 Marvin and the Moths

Middle school is off to a rocky start for Marvin Watson. Doomed to misfit status, his only friends are a girl with major orthodontics, the smelliest boy in school, and the trio of sarcastic man-sized moths that live in his attic.

No one said middle school would be easy Also, no one said that Marvin's town would be threatened by mutant bugs, including a very hungry, Shakespeare-quoting spider. But life in the suburbs is full of surprises. Will Marvin be the one to unravel the mystery behind the mutants and save the town? Or will he be too busy with the real threat: his first school dance?

This hilarious send-up of middle school has the humor of James Patterson's I Funny, the underdog hero of Diary of a Wimpy Kid, and the zany action of NERDS...and features illustrations by coauthor Matthew Holm, New York Times bestselling illustrator of Babymouse, Squish, and Sunny Side Up.