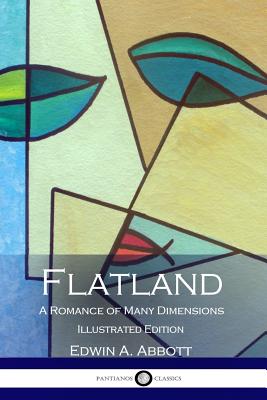 A Romance of Many Dimensions, Illustrated

This print edition of Flatland: A Romance of Many Dimensions contains all of the original and vital illustrations, allowing the reader to comprehend the geometry described in the satirical story.
First published in the 1880s, Flatland is a playful satire of the hierarchical class structure which Abbott perceived as defining the Victorian society in which he lived. The titular country has a population consisting of different shapes; their shape denotes their place in the society - the more sides the shape has, and the more regular their shape, the higher the place they occupy in the social strata. The author himself is a square - a status which approximately equates to the educated middle-classes of Victorian Britain.
The ordinary, day-to-day existence of the author (A. Square) is brought into question when he experiences a dream. In it a shape with depth, a Sphere, announces its existence and origin in Spaceland; a place with a third dimension. Thrilled by the revelation, the Square postulates that perhaps there are actually four, five or more dimensions constituting the world.
At the time of its release Flatland gained only modest attention, and thereafter was consigned to obscurity for four decades. After Einstein's theory of relatively brought the science of physics to popular prominence in the 1920s, Flatland was rediscovered and promptly became popular for its humour and explanatory style. Today Flatland is recognised in academic circles for its sound explanations of geometrical shapes and dimensional theory than its satirical context as a send up of the rigid Victorian society.