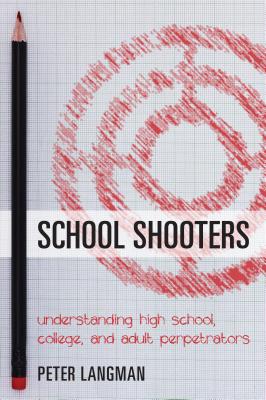 School shootings scare everyone, even those not immediately affected. They make national and international news. They make parents afraid to send their children off to school. But they also lead to generalizations about those who perpetrate them. Most assumptions about the perpetrators are wrong and many of the warning signs are missed until it's too late. Here, Peter Langman takes a look at 48 national and international cases of school shootings in order to dispel the myths, explore the motives, and expose the realities of preventing school shootings from happening in the future, including identifying at risk individuals and helping them to seek help before it's too late.

Peter Langman is a psychologist whose work on school shooters has received international recognition. His previous book, Why Kids Kill: Inside the Minds of School Shooters, was named a Choice Outstanding Academic Title and was translated into German, Dutch, and Finnish. Langman's research has been cited in congressional testimony on Capitol Hill and thousands of news outlets. He has been interviewed by the New York Times, CBS-TV, Fox, CNN, the BBC, and over 150 other news outlets in the USA, Canada, Europe, Asia, Australia, and the Middle East. Langman has trained thousands of professionals in education, mental health, and law enforcement on identifying potential school shooters. He maintains the largest online collection of materials relating to school shooters at schoolshooters.info. He is in private practice in Allentown, PA.
Loading...
or support indie stores by buying on