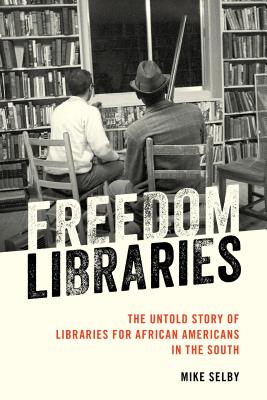 The Untold Story of Libraries for African Americans in the South

Freedom Libraries: The Untold Story of Libraries for African-Americans in the South. As the Civil Rights Movement exploded across the United States, the media of the time was able to show the rest of the world images of horrific racial violence. And while some of the bravest people of the 20th century risked their lives for the right to simply order a cheeseburger, ride a bus, or use a clean water fountain, there was another virtually unheard of struggle--this one for the right to read. Although illegal, racial segregation was strictly enforced in a number of American states, and public libraries were not immune. Numerous libraries were desegregated on paper only: there would be no cards given to African-Americans, no books for them read, and no furniture for them to use. It was these exact conditions that helped create Freedom Libraries. Over eighty of these parallel libraries appeared in the Deep South, staffed by civil rights voter registration workers. While the grassroots nature of the libraries meant they varied in size and quality, all of them created the first encounter many African-Americans had with a library. Terror, bombings, and eventually murder would be visited on the Freedom Libraries--with people giving up their lives so others could read a library book. This book delves into how these libraries were the heart of the Civil Rights Movement, and the remarkable courage of the people who used them. They would forever change libraries and librarianship, even as they helped the greater movement change the society these libraries belonged to. Photographs of the libraries bring this little-known part of American history to life.

Born and raised in the shadow of the British Columbia Rocky Mountains, Mike Selby is a professional librarian. He received his MLIS from the University of Alabama, which is where he first unearthed the story of the Freedom Libraries. He is also a newspaper columnist, having published over 900 articles about libraries, reading, and print culture--much of it covering libraries during the Civil Rights Movement. He has also had two peer-reviewed academic pieces published, both on this topic.
or support indie stores by buying on
Copyright © 2020 American Booksellers Association