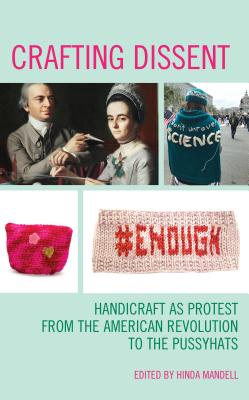 Pussyhats, typically crafted with yarn, quite literally created a sea of pink the day after Donald J. Trump became the 45th president of the United States in January 2017, as the inaugural Women's March unfolded throughout the U.S., and sister cities globally. But there was nothing new about women crafting as a means of dissent. Crafting Dissent: Handicraft as Protest from the American Revolution to the Pussyhats is the first book that demonstrates how craft, typically involving the manipulation of yarn, thread and fabric, has also been used as a subversive tool throughout history and up to the present day, to push back against government policy and social norms that crafters perceive to be harmful to them, their bodies, their families, their ideals relating to equality and human rights, and their aspirations. At the heart of the book is an exploration for how craft is used by makers to engage with the rhetoric and policy shaping their country's public sphere. The book is divided into three sections: "Crafting Histories," Politics of Craft," and "Crafting Cultural Conversations." Three features make this a unique contribution to the field of craft activism and history: -The inclusion of diverse contributors from a global perspective (including from England, Ireland, India, New Zealand, Australia) -Essay formats including photo essays, personal essays and scholarly investigations -The variety of professional backgrounds among the book's contributors, including academics, museum curators, art therapists, small business owners, provocateurs, artists and makers. This book explains that while handicraft and craft-motivated activism may appear to be all the rage and "of the moment," a long thread reveals its roots as far back as the founding of American Democracy, and at key turning points throughout the history of nations throughout the world.

Hinda Mandell is associate professor in the School of Communication at RIT in New York, and is editor of Crafting Dissent: Handicraft as Protest from the American Revolution to the Pussyhats (Rowman & Littlefield, 2019); co-curator and co-editor of Crafting Democracy: Fiber Arts and Activism (RIT Press, 2019); a co-editor of Nasty Women and Bad Hombres: Gender and Race in the 2016 US Presidential Election (University of Rochester Press, 2018); the author of Sex Scandals, Gender and Power in Contemporary American Politics (Praeger, 2017) and co-editor of Scandal in a Digital Age (Palgrave Macmillan, 2016). Mandell's website is omghinda.com, and she's on Twitter: @hindamandell and @crochetactivism, and Instagram: @crochetactivism. Mandell is passionate about organizing crowd-created yarn installations in public spaces that are connected to the history of a region's social-reform movements.
Loading...
or
Not Currently Available for Direct Purchase