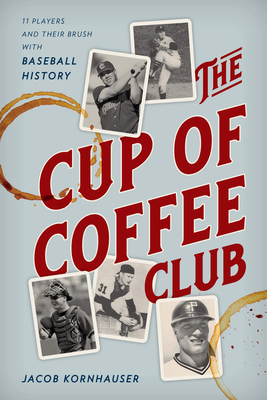 The Cup of Coffee Club

11 Players and Their Brush with Baseball History

The Cup of Coffee Club shares the stories of eleven men who played in just a single major league baseball game and how they responded to the heartache of never making it back. Featuring exclusive interviews with each of the players, their insight provides a unique look into the struggles of being a professional ballplayer. Reaching the major leagues is a pipe dream for most young baseball players in America. Very few ever get to live it out. While many that do make it to the big leagues stay there for a long time, there are just as many that are only there for a brief moment. A select few of those players face the elation and frustration of getting to play in just one major league game. The Cup of Coffee Club: 11 Players and Their Brush with Baseball History tells the stories of eleven of these players and their struggles to reach the major leagues, as well as their struggles to get back. They include a former Major League Baseball manager, the son of a Baseball Hall of Famer, and two different brothers of Hall of Famers. Exclusive interviews with each of the players provide insight into what that single seminal moment meant and how they dealt with the blow of never making another major league appearance again. Spanning half a century of baseball, each player's journey to Major League Baseball is distinct, as is each of their responses to having played in just a single game. The Cup of Coffee Club shares their unique perspectives, providing a better understanding of just how special each major league game can be.

Jacob Kornhauser is a sports writer and television producer based in Los Angeles. He has previously worked at ESPN, Bleacher Report, and FanSided, a subsidiary of Sports Illustrated.
Loading...
or support indie stores by buying on