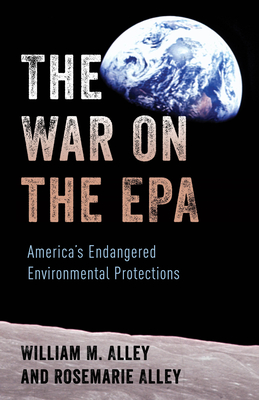 The War on the EPA

As the U.S. Environmental Protection Agency (EPA) nears the half century mark, the public is largely apathetic towards the need for environmental protections. Today's problems are largely invisible, and to many people's eyes, the environment looks like it's doing just fine. The crippling smog and burning rivers of yesteryear are just a memory. In addition, Americans are repeatedly told that the EPA is hurting the economy, destroying jobs, and intruding into people's private lives. The truth is far more complicated. The War on the EPA: America's Endangered Environmental Protections examines the daunting hurdles facing the EPA in its critical roles in drinking water, air and water pollution, climate change, and toxic chemicals. This book takes the reader on a journey into some of today's most pressing environmental problems: toxic "forever chemicals" known as PFAS, pervasive agricultural pollution, dead zones in the Gulf of Mexico, and widespread air and water pollution from use of fossil fuels. Delving into the science, politics, and human dimension of these and other problems, the book illustrates the challenges of regulation, how today's war on science is undermining the scientific foundation upon which the agency's legitimacy rests, and why a strong U.S. Environmental Protection Agency is more important than ever before.

William (Bill) M. Alley, PhD, is an internationally-recognized authority on groundwater and an environmental science writer. He was Chief, Office of Groundwater for the U.S. Geological Survey for almost two decades. Alley has interacted with the EPA in numerous ways for more than 40 years and his experiences allow for an objective, critical look at the agency. Rosemarie Alley is a freelance writer with extensive writing and public speaking experience. Bill and Rosemarie previously collaborated on Too Hot to Touch: The Problem of High-Level Nuclear Waste (2013) and High and Dry: Meeting the Challenges of the World's Growing Dependence on Groundwater (2017). The Alley's divide their time between San Diego, California and Longmont, Colorado.
Loading...
or
Not Currently Available for Direct Purchase