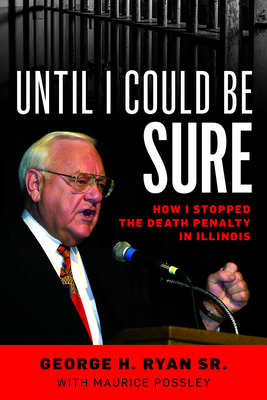 Until I Could Be Sure

How I Stopped the Death Penalty in Illinois

In January 2000, Illinois Governor George Ryan declared a moratorium on executions--the first such action by any governor in the history of the United States. Despite a long history as a death penalty proponent, Ryan was emotionally moved after allowing an execution in 1999. He was also profoundly disturbed by the state's history--12 men had been executed and 13 had been exonerated since the return of the death penalty in Illinois in 1977. More had been proven innocent than had been executed. Three years later, in 2003, Ryan pardoned four death row inmates based on their actual innocence and then commuted the death sentences of 167 men and women. This was the largest death row commutation in U.S. history. At that time, 12 states and the District of Columbia barred the death penalty. His actions breathed new life into the movement to abolish the death penalty in the United States. Over the next 15 years, Illinois and seven other states would abolish the death penalty--New Jersey, Maryland, New Mexico, Connecticut, Delaware, New York and Washington. Today, the push to reform the criminal justice system has never been stronger in America, a nation that incarcerates more men and women than any other country in the world and also wrongfully convicts hundreds of men and women. Although the number of executions carried out every year continues to drop in the U.S., the death penalty still exists in 31 states. Moreover, in some non-death penalty states, factions seek to reinstate it. Until I Could Be Sure: How I Stopped the Death Penalty in Illinois is, in his own words, the story of George Ryan's journey from death penalty proponent to death penalty opponent. His story continues to resonate today. He defied the political winds and endured the fury and agony of the families of the victims and the condemned as well as politicians, prosecutors and law enforcement. It is a story of courage and faith. It is a timely reminder of the heroic acts of a Republican Governor who was moved by conscience, his faith and a disturbing factual record of death row exonerations.

George H. Ryan Sr. was the 39th Governor of the State of Illinois. Born in 1934, the son of a pharmacist, Ryan grew up in Kankakee, Illinois. He was first elected to state office in 1972 as an Illinois State Representative. He served two terms as Minority Leader of the House of Representatives and one term as Speaker of the House. He served as Illinois Lieutenant Governor from 1983 to 1991, as Illinois Secretary of State from 1991 to 1999, and then was Governor from 1999 to 2003. Ryan was the first Governor in U.S. history to suspend the death penalty, declaring a moratorium in 2000. In 2003, as he left office, Ryan emptied death row in Illinois by issuing a blanket commutation order. He was indicted in 2003 and convicted of federal corruption charges relating to conduct while he was Illinois Secretary of State. He served nearly six years in prison and was released in 2013. Age 84, Ryan still travels extensively to speak about the death penalty and the criminal justice system, as well as to support humanitarian efforts in Cuba. Maurice Possley is a Pulitzer Prize-winning journalist and author of three non-fiction books. Ryan cited the reportage of Possley and his colleagues at the Chicago Tribune when he declared the moratorium and emptied death row. Possley is now senior researcher for the National Registry of Exonerations, a national database of more than 2,500 wrongful convictions maintained by the University of Michigan Law School, Michigan State University College of Law and University of California Irvine Newkirk Center for Science & Society.
Loading...
or
Not Currently Available for Direct Purchase