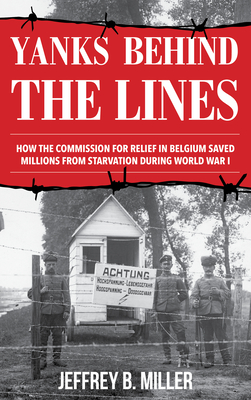 Yanks Behind the Lines

-Winner, 2021 Colorado Book Awards, History -Winner, 2021 American Fest's Best Book Awards, History: Military "This is a powerful work of history, as informative as it is dramatically gripping. An impressive blend of painstaking historical scholarship and riveting storytelling."-Kirkus Reviews More than nine million soldiers died in World War I. At the same time, a US-led effort saved nearly ten million civilians from starvation behind the lines during the German occupation, yet one of America's greatest humanitarian efforts is virtually unknown today. In this gripping book, Jeffrey B. Miller tells the remarkable history of two American and Belgian citizen-created organizations that led a massive food relief program for civilians trapped in German-occupied Belgium and northern France. Herbert Hoover, then a successful international businessman, was the driving force behind the effort, coercing and bullying the governments of Germany, Great Britain, France, and the United States to allow a group of idealistic young volunteers to organize in occupied Belgium and coordinate the distribution of tons of food and clothing to desperate Belgians. These crusaders, known as CRB delegates, had to maintain strict neutrality as they watched the Belgians suffer under the harsh German regime. Miller tells compelling stories of German brutality, Belgian relief efforts, and the idealistic Americans who went into German-occupied Belgium from October 1914 up to May 1917, when they were forced to leave after the April entry into the war of the United States. Yanks interweaves the history of the time with fascinating personal stories of volunteers, diplomats, a young Belgian woman who started a dairy farm to feed Antwerp's children, the autocratic head of the Belgian relief organization, and the founder of the American organization, who would become known to the world as the Great Humanitarian and later, largely because of his work in Belgium and post-war Europe, would become the thirty-first president of the United States. Visit the book's website here: www.YanksBehindTheLines.com Watch the book trailer here: https: //www.youtube.com/watch?v=H0YKJRrSe4o.

Jeffrey B. Miller has been a writer, magazine editor, and independent historian for more than forty years. After a decade of full-time research, he wrote two Kirkus Best Books of the Year on the Belgian relief effort. This book is the culmination of his work on a concise history for readers interested in learning more about one of America's finest hours in humanitarian aid.
Loading...
or support indie stores by buying on