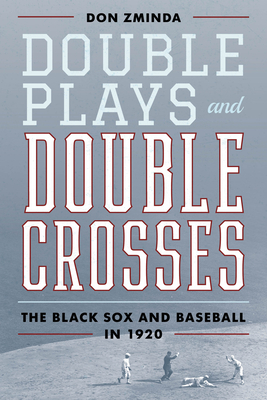 The Black Sox and Baseball in 1920

" An] essential study of a previously unexplored chapter of the game's history. An important addition to baseball collections...." Library Journal, Starred Review The gripping story of how one of the most infamous scandals in American history-the Black Sox scandal-continued for nearly a year following the fixed World Series of 1919 until the truth began to emerge. The Black Sox scandal has fascinated sports fans for over one hundred years. But while the focus has traditionally been on the fixed 1919 World Series, the reality is that it continued well into the following season-and members of the Chicago White Sox very likely continued to fix games. The result was a year of suspicion, intrigue, and continued betrayal. In Double Plays and Double Crosses: The Black Sox and Baseball in 1920, Don Zminda tells the story of an unforgettable team and an unforgettable year in baseball and American history. Zminda reveals in captivating detail how the Black Sox scandal unfolded in 1920, the level of involvement in game-fixing by notable players like Shoeless Joe Jackson and Buck Weaver, and the complicity of White Sox management in covering up details of the scandal. In addition, Zminda provides an in-depth investigation of games during the 1920 season that were likely fixed and the discovery during the year of other game-fixing scandals that rocked baseball. Throughout 1920, the White Sox continued to play-and usually win-despite mistrust among teammates. Double Plays and Double Crosses tells for the first time what happened during this season, when suspicion was rampant and the team was divided between "clean" players and those suspected of fixing the 1919 World Series.

Don Zminda spent more than two decades with STATS LLC, first as director of publications and then director of research for STATS-supported sports broadcasts. He has written or edited over a dozen sports books, including The Legendary Harry Caray: Baseball's Greatest Salesman (Rowman & Littlefield, 2019) and the SABR publication Go-Go to Glory: The 1959 Chicago White Sox. He has been a member of the Society for Baseball Research since 1979. A Chicago native, Zminda now resides in Los Angeles.
Loading...
or support indie stores by buying on