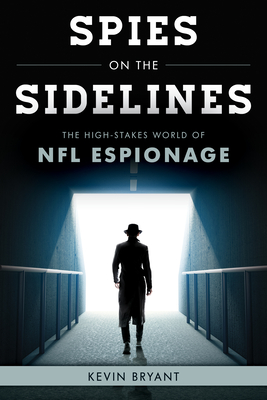 Spies on the Sidelines

The High-Stakes World of NFL Espionage

The first book to fully explore the extraordinary covert actions NFL teams are willing to take in order to win. Spies disguised as priests. Secret surveillance of targets' movements. Radio frequency jamming. Tapped telephones. These might sound like acts of espionage right out of the Cold War or a spy movie--but in fact came straight from the National Football League. In Spies on the Sidelines: The High-Stakes World of NFL Espionage, Kevin Bryant provides the first in-depth investigation of spying in professional football, as well as the countermeasures utilized to defend against these threats. Spanning across all teams and eras, Bryant shines a light on the shady world of NFL reconnaissance--from clandestine photography and hidden draft prospects to listening devices and stolen documents--along with the permissible, if sometimes questionable, spy techniques teams utilize day in and day out to gain an advantage over their opponents. Written by a former Special Agent with decades of experience collecting and safeguarding information for the Department of Defense, Spies on the Sidelines reveals that, behind the game-day action, professional football can be as cloak-and-dagger as American intelligence agencies. This fascinating and expansive compilation of NFL spy anecdotes exposes the extraordinary measures teams are willing to take in order to win.

Kevin Bryant has twenty-two years of experience safeguarding and gathering information for the Department of Defense, including thirteen years as a Special Agent. He received the Bronze Star Medal and the Secretary of Defense Medal for the Global War on Terrorism. Bryant has coached soccer at many levels and was the president of a district-level United States Youth Soccer program. He graduated with top honors from American Military University with an M.A. in Intelligence Studies and an M.S. in Sports Management. He and his family live on the outskirts of Atlanta, GA.
Loading...
or support indie stores by buying on